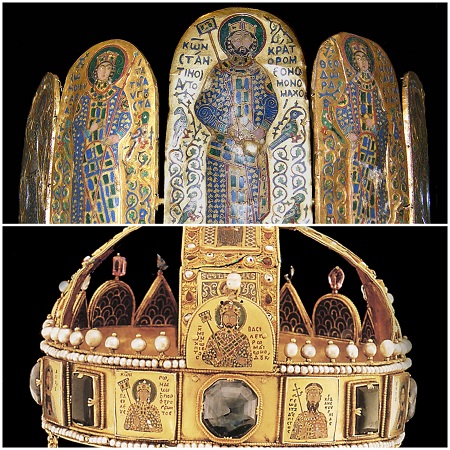 The story of the Byzantine crown jewels is a sad allegory of the empire itself. Two centuries before Byzantium’s conquest by the Ottomans – the jewels were pawned to Venice by an empress who was in the middle of a civil war and was desperate for money. The Byzantines tried to recover their crown repeatedly but the sum was exorbitant and the Venetians preferred to keep it in St Mark’s Treasury as a bargaining tool. It remained there until 1797 when it became part of Napoleon’s loot.

Against the background of true Byzantine complexity, in 1343 the imperial crown was pledged with the Venetians as collateral for a loan of 30,000 ducats. The unprecedented step was taken by Anna of Savoy, who, after the death of her husband Andronikos III had ensured that her son would become emperor John V Palaiologos. Anna acted as regent but the administration was entrusted to an advisor whom Anna didn’t like. The court intrigue led to a civil war which Anna had to fund.

The terms agreed with Venice were prohibitive. The total sum was twice what the city of Constantinople brought in per year and the loan was to be repaid at the rate of 10,000 ducats a year over three years, plus 5% interest. In 1369, John visited Venice to reclaim the crown to be humiliatingly detained there as a debtor for two years. Successive emperors never gave up hope and their ambassadors to Venice brought the issue up repeatedly in 1390, 1406, 1418, 1423, 1442 and 1448.

Clearly, no one could handle the Byzantines better than the Venetians, to whom they had been a close ally and a sworn enemy. Venice may have deprived the last Byzantine emperors of their crown, but ultimately it ensured that the crown never fell to the Ottomans. The Byzantine crown, however, fell to Napoleon who in 1797 defeated Venice and cleared out its famous St Mark’s Treasury. The Byzantine crown’s fate was most likely to be melted down to fund Napoleon’s future wars.

With all the turmoil, no one knows what this crown even looked like. Byzantine history, however, was long and there were many crowns. I’ve seen two of them, both in Budapest. There’s the Monomachus Crown in the Hungarian National Museum, dated 1042, with cloisonné enamels like those on the Pala d’Oro in Venice. And there’s the Holy Crown of Hungary in the Hungarian Parliament, given to King Géza I by the Byzantine Emperor Michael VII Doukas in 1074. Take your pick.