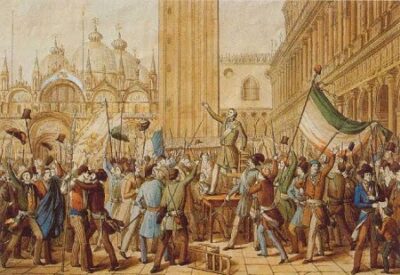 The mighty Republic of Venice had lost its independence to Napoleon half a century earlier and after being cynically passed on to the Austrians by its conqueror, it was still reeling under foreign occupation when, in 1848, the year of European revolutions, the Venetians rose up against the Habsburgs and proclaimed the restoration of the old order – the short-lived Republic of San Marco. The rebellion wasn’t led by a charismatic leader but a bespectacled middle-class lawyer – Daniele Manin.

The ultimate cause of rebellion in 1848 was that Venetian capitalism was threatened by Habsburg absolutism. Austria exploited Venice financially while favouring Trieste over Venice as the imperial seaport. By choking off credit to local entrepreneurs, the Austrian bureaucracy impeded the growth of Venice’s economy. Towards the end of the 1840s, Venetian intellectuals together with manufacturers, bankers and merchants intensified their push for political change and greater economic freedom.

In 1848 Venice was swept up in the revolutionary tide crashing over the Italian peninsula and the continent. On 22 March, the revolutionaries, led by Manin, entered the Arsenale, Venice’s historic navy yard and munitions depot. It was a direct challenge to the Austrian authorities. Believing that history was on his side, Manin led his followers out of the compound and into the city with the cry “Long live St Mark!”, which the Venetians took to mean restoration of the independent Republic of Venice.

Venice’s provinces, save Verona which was held back by the Austrians, immediately sided with the lagoon. The new regime made Manin president and granted him the dictatorial authority. The middle class supported the new order which marked a permanent break with the old aristocracy. Manin prudently provided for the lower class needs while he promised to enforce law and order strictly. The re-appearance of the independent Republic of Venice was a startling surprise and a remarkable achievement.

The 17 months that followed were a time of hope – and despair. Manin committed several tactical errors, including not seizing the Austrian fleet and adopting a wait-and-see policy towards the first war of Italian unification. He survived as long as he did because of Piedmont’s campaign against Austria, not his own efforts. By August 1849, the Austrians recaptured Venice. Manin who died in exile nevertheless remains a hero to the Italian unification, for which the Venetian Revolution was a dry run.