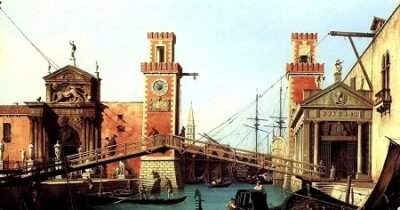 Venice’s massive historic shipyard and armory is a unique pre-industrial example of mass production with centralised organisation, standardised processes and stringent quality control, all of which anticipate the modern factory. Founded in 1104, it became Europe’s greatest naval installation and the largest productive complex in the world. Venice’s conquest of the eastern Mediterranean or its trade routes to northern Europe wouldn’t have been possible without the ships built in the Arsenale.

In Venice’s early days, the production and maintenance of the ships, which were vital to its trade and territorial expansion, were spread out in the boatyards or squeri all over the city. In the early 12th century during the reign of Doge Ordelafo Faliero the construction of a centralised state dockyard began. Initially it worked only to maintain privately built naval ships, but in 1320 it was expanded to enable the state’s navy and the larger private merchant ships to be constructed and maintained in one place.

Its methods for mass production of ships, based on the standardised production of different elements in different areas of the Arsenale, made it possible to build an entire ship, on an assembly-line basis, in a single day. In 1201, an early version of the Arsenale worked round the clock to build ships to transport 33 500 crusaders to the Holy Land and in 1570, during a war against the Ottomans, it produced 100 warships in less than two months, which proved decisive in the Battle of Lepanto.

The position of the world’s first factory complex between La Bragora and the island of Olivolo was well thought out: for all its wood requirements the dockyard had a convenient link to an exclusive forest in the mountains of Cadore on the mainland and it was just as well protected from a possible enemy attack. The Arsenale also catered to the needs of its workers, the arsenalotti, who enjoyed various cradle-to-grave fringe benefits which included one of the world’s first government housing schemes.

Throughout Venice’s history, the Arsenale was the stuff of legend. The term itself derives from the Arabic daras-sina’ah, which means “house of industry” and attests to the Venetians’ frequent contacts with the Orient. The Arsenale’s thumping and clanking assembly lines were duly referenced in Dante’s Inferno while the ever loyal arsenalotti were instrumental in Venice’s 1848 uprising against the Austrian rule which bought them their final 17 months of independence as a proud republic.