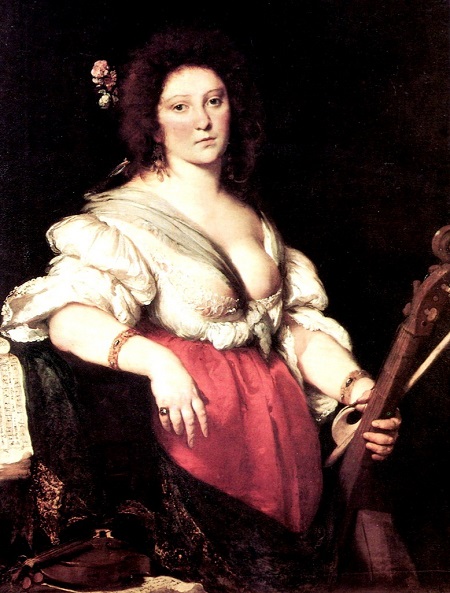 In 17th-century Venice, much like everywhere else at the time, a woman’s place was by her husband’s side. While good girls sat at home, bad girls – also known as courtesans – did inappropriate things like composing music or singing. During her lifetime, Barbara Strozzi was dismissed as a courtesan, chiefly on the strength of her music-making. From today’s perspective, she was a legit Baroque composer and one of the first female composers to publish music under her own name.

An out-of-wedlock daughter of Venetian playwright and poet Giulio Strozzi and his servant, the composer was christened Barbara Valle. She owed her musical career to her father who hired Francesco Cavalli, the best composer around, to train her and by the time she was 16, she was the star of home concerts. In her lifetime, she published eight volumes of music, more than any composer of any gender in 17th-century Venice. She also left behind four children and no husband.

Strozzi’s music is emphatically singer’s music and she most likely sang a lot of the music she wrote. She composed tunes for voice and instrumental accompaniment with a gift for embodying words in sound: words about desire reverberate with unresolved tension while words about anger feel like a quickened pulse. As a singers’ composer, Strozzi often uses the voice to create different moods. In 17th-century Venice, song was powerful magic and she clearly knew how to work it.

Despite her obvious talent as a musician, Strozzi’s gender was an easy target for her detractors. Many of them painted her as a courtesan, although there is no proof that this was the case. Venice may have been a liberal island in Europe’s sea of conservatism but this was the 17th century nevertheless. The ethos of the Counter-Reformation wasn’t favourable to women: the Aristotelian idea that they might not have souls or the biblical association of women with sin still held the sway.

To illustrate the point, one needn’t look any further than what may be the sole surviving portrait of Strozzi by a contemporary. Bernardo Strozzi (no known relation of the composer) depicted her as a licentious matron wearing a dress, which exposes her breast. She clutches a viola de gamba which is likely intended to evoke the hourglass shape of a woman’s body. Her eyes stare directly at the viewer, breaking 17th-century codes that required women to avoid making eye contact with men.