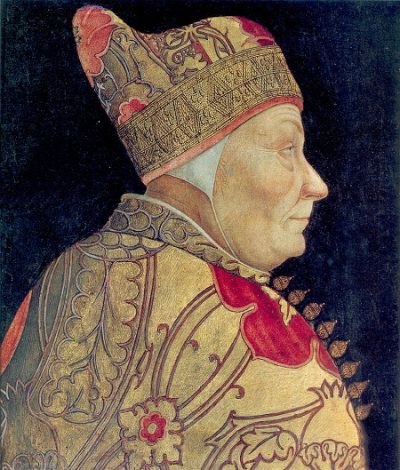 Padua born and trained Lazzaro Bastiani may be best known for his expressive figures of saints that seem to glide in ethereal atmospheres but he also painted one of the first secular portraits in Venetian art. His Portrait of Doge Francesco Foscari, Venice’s longest serving doge, likely started not only the Venetian tradition of ducal portraits with the later masterpieces of Gentile Bellini’s Doge Giovanni Mocenigo or Giovanni Bellini’s Doge Leonardo Loredan but also patrician portraits by Jacometto Veneziano.

Once in Venice, Bastiani seems to have gravitated into the circle of artists working around Andrea Mantegna and his in-laws – Jacopo Bellini and his two sons, Gentile and Giovanni. He’s known to have collaborated with both on paintings for major Venetian churches and Scuole Grandi. Records from 1462 show that he was paid at the same rate as Giovanni which suggests that the two competed for commissions on equal footing. Bastiani is also known, if sometimes disputed, as Vittore Carpaccio‘s teacher.

In Bastiani’s Portrait of Doge Francesco Foscari, which now hangs at the Museo Correr in Venice, the sitter is shown in profile. This is a format derived from Roman coins and repeated in the Portrait of Doge Giovanni Mocenigo by Gentile Bellini. Unlike Gentile’s frugal-looking doge, Bastiani’s subject is dressed with opulence which the artist captures with the skill later matched by Giovanni Bellini in his Portrait of Doge Leonardo Loredan. All three portraits share their authors’ interest in sculptural forms.

Foscari’s reign, the longest in Venetian history, lasted more than 34 years and coincided with the inception of the Renaissance. Nicknamed the Warrior Doge, Foscari waged a costly and losing war against Milan but ultimately extended Venice’s dominions both overseas and in mainland Italy. The end of his reign was overshadowed by the corruption trial of his only surviving son, Jacopo, who was found guilty and exiled to Crete. The story was made into a drama by Lord Byron and painted by Francesco Hayez.

In 1990, Bastiani’s Portrait of Doge Francesco Foscari was famously stolen in broad daylight from the Museo Correr which also exhibits several of Foscari’s personal articles, including his doge’s hat, corno ducale. The small painting was removed from its frame in the Correr’s second-floor picture gallery during regular museum hours. The thief walked out of the building with the painting hidden under a coat and then disappeared in the busy Piazza San Marco. The 15th-century portrait was later recovered.