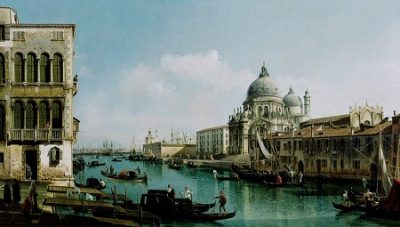 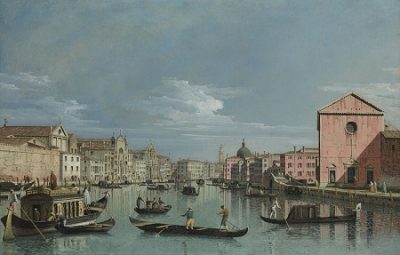 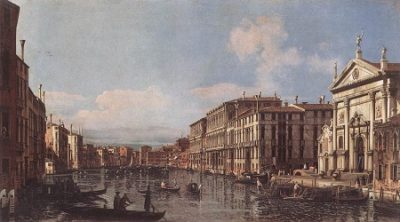 In response to the growing demand from Grand Tourists for souvenirs of their travel experience, 18th-century Venice developed a cottage industry of vedute, or view paintings, of the city’s iconic sights. This market was dominated by Canaletto but the overflow was shared by countless contemporaries and followers, including Canaletto’s nephew Bernardo Bellotto. His Venetian views make up a small but important proportion of his output as he is now better known for his views of northern European cities.

Bellotto’s urban scenes have the same realism as his uncle’s Venetian views but are noticeably darker and colder in tone and colour. Bellotto’s silvery light, contrasted by heavy shadows, is often explained by his use of impasto, or thick layering, particularly in the sky, where broad brushstrokes denote clouds as observed by the artist in the weather conditions north of the Alps. As a result, his vedute have greater monumentality and even his compositions derived from works by Canaletto tend to increase in scale.

Bellotto was his uncle’s best student – and also his best imitator. The confusion around attribution, especially of Bellotto’s early vedute, has never ceased. Adding to this was Bellotto’s use of his uncle’s name, particularly during his time outside Italy. This practice led to some acrimony between the two, including a bizarre incident when Canaletto was forced to take out an advertisement in London to invite witnesses to his work to counter rumours that the real Canaletto (Bellotto) was in fact in northern Europe.

Bellotto was the epitome of an 18th-century travelling artist. After leaving Venice, he moved to Rome and northern Italy before settling in Dresden where he became the Saxon court’s highest paid artist. During the Prussian occupation of Dresden, he worked in Vienna and Munich before becoming court painter in Warsaw and a visitor to St Petersburg. In his vedute, each of these cities is skillfully transformed into a theatrical sibling of Venice, in panoramic compositions and exaggerated perspectives.

Similar in genre to capricci – fantasy landscapes of classical ruins in pastoral settings – Bellotto’s early views of Venice share Canaletto’s attention to architectural detail but stand out in their use of light and shadow. Bellotto’s panoramic views become progressively more ambitious in scope — often combining more than one point of view in a single picture in order to encompass more than the human eye could take in at a time. In a city like Venice where exaggeration is the norm, this works out just fine.