Caffi and the 19th-century idea of Venice 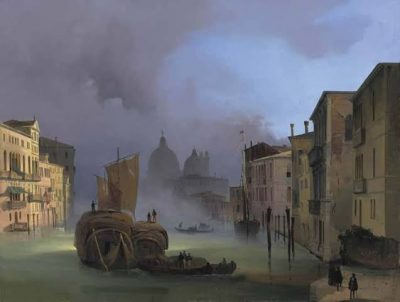 Caffi and the 19th-century idea of Venice

Ippolito Caffi, the foremost 19th-century representative and innovator of the urban vedute is an undeserved victim of the general interest in much earlier periods of Venetian art. Even with vedute, a mostly home-grown genre depicting famous Venetian cityscapes, there is a much greater recognition and appreciation of earlier generations of Canaletto, Bellotto and Guardi.

This is, of course, more a reflection upon the nostalgic hold Venice’s golden age of the Quattrocento and the Cinquecento has over Venetophiles than the artistic skill of Caffi. In the mind of lovers of Venice, it has all been a steady decline since the heyday of High Renaissance and Caffi’s dream-like depictions of misty cityscapes underscore this romanticised vision of Venice.

At the same time, Caffi’s artistic referencing of Canaletto and his contemporaries is evident from the luminous and translucent quality of his cityscapes and architectural details within them. By the time of Caffi’s creative period, the itinerary of the Grand Tour had become so standardised that the vedute of familiar scenes like the Grand Canal were bordering on well-established clichés.

And yet Caffi’s mist-shrouded cityscapes – and particularly his nocturnal views of Venice – do manage to stand out by portraying mysterious visions where the glow of light, shadows and fog supersedes the instantly recognisable Venetian sights. Unlike the earlier generations of vedutisti, Caffi thus captures more the contemporary idea of Venice than Venice itself.

Surveying Caffi’s Venetian vedute at Ca’ Rezzonico, the city’s Museo del Settecento Veneziano, is always the highlight of both this opulent museum and the Egidio Martini collection which it houses. It is also an opportunity see another side of Venice – one that portrays the familiar outlines of the city in eerily blurred, almost impressionistic tones and one that proves that creativity in Venice has lived on beyond Renaissance.