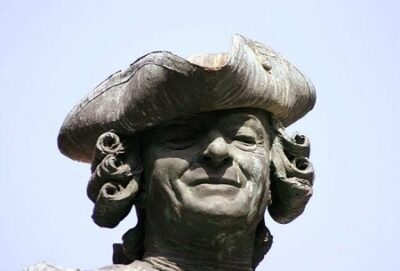 A victim of cultural chauvinism that runs along linguistic lines, Carlo Goldoni – one of the most influential figures in Italian literature – frequently draws a blank in other countries. In Italy where Goldoni’s stature is downright majestic, all those Goldoni statues, vias and piazzas more than make up for their notable absence elsewhere. In Venice where the founder of Italian realistic comedy was born, he has a first-class museum in his family home and in the Teatro Goldoni – his own theatre.

Born into a middle-class Venetian family, Goldoni showed interest in theatre from an early age. As a student, he would put aside his law books to attend performances and as a practicing lawyer and diplomat, he would write plays for several Venetian theatres. Later in life he moved to Paris where he directed Italian theatre and ended up teaching Italian to daughters of King Louis XVI. The French Revolution put an end to the royal gig as well as his pension, causing him to die in poverty.

Until Goldoni, the prevailing commedia dell’arte theatre rested on actors who would improvise their roles from a list of stock characters. Drama therefore revolved about the actors themselves and the success with which their talents impressed the audience. In Venice especially, where the wearing of carnival masks was a widespread cultural phenomenon, theatre actors relied on masks whose appearance and facial expressions matched the character they were playing.

Goldoni’s works signalled a new direction for theatre in which primacy was restored to the author whose texts, not the actor’s improvisations, determined the play. By replacing the masked stock figures with realistic characters and loose and repetitive action with structured plots, Goldoni turned the predictable farce of commedia dell’arte into character plays. Although he lived during the golden age of masks in Venice, Goldoni paradoxically put them out of use in theatre.

Goldoni’s more than 250 plays, written in Italian, Venetian dialect and French, brought new realism and more credible characterisation to the Italian stage. By observing society and providing plausible motivation for his characters, Goldoni’s more credible and realistic works gained an immense following. His plays offered his contemporaries images of themselves by dramatising the lives, values and conflicts of the emerging middle classes, often at the expense of the decaying aristocracy.