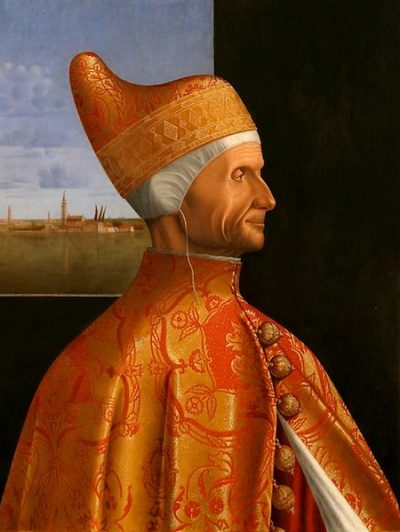 No matter the subject, Vittore Carpaccio always manages to depict Venice in his paintings. Unlike other early portraitists of Venetian doges like Lazzaro Bastiani, Gentile Bellini or Giovanni Bellini (who even happened to paint the very same doge) and who set their subjects against monochrome backgrounds, Carpaccio’s Portrait of Doge Leonardo Loredan is styled against what looks like a window view of the Venetian lagoon. It’s a skillful early work from which Venetian portraiture could easily evolve.

It must be noted that the painting, now in the Museo Correr in Venice, is merely attributed to Carpaccio, with other possible authors being Gentile Bellini or Vincenzo Catena. The portrait was also once thought to be a 19th-century copy of a lost original, but restoration has confirmed that it is an authentic panel painting of the early 16th century. Another version of the same portrait, with slight variations in the depiction of Venice in the background, is found in the Accademia Carrara di Belle Arti in Bergamo.

The painting portrays Doge Leonardo Loredan who reigned from 1501 to 1521, a time marked by war, more specifically, the War of the League of Cambrai, as well as battle with the papacy. Loredan led Venice’s successful resistance to the pope and the armies of the League of Cambrai, an alliance of European powers seeking to counter the mainland expansion of the Venetian domain. Carpaccio’s portrait is an unidealised image that captures the doge’s stature by alluding to his wisdom, experience and leadership.

Unlike Giovanni Bellini who, recalling imperial busts from Roman antiquity, executes a frontal portrait of the same doge, Carpaccio opts for a profile position which conveys the same concept of power as Bellini’s work. In any case, Bellini’s frontal depiction – a pose reserved for sacred subjects such as Christ – isn’t a style that is repeated in later 16th-century portraits of the doges. Venetian portraiture of the doges would go along with Carpaccio’s nod to the fact that mortal men are to be depicted in profile.

In Carpaccio’s portrait, as much as in Bellini’s, the assertive plasticity of the doge’s expression is only heightened by his clothes. In doges’ portraits clothing plays an important role in asserting the wealth of Venice and the prestige of the office. The doge’s brocade gown is featured, with consummate skill, in both Carpaccio’s and Bellini’s portraits. Both artists also portray Loredan wearing a doge’s hat, corno ducale, with a fine linen cap, camauro, underneath it. The effect is regal and papal at the same time.