Carpaccio’s Ten Thousand Martyrs are just as many 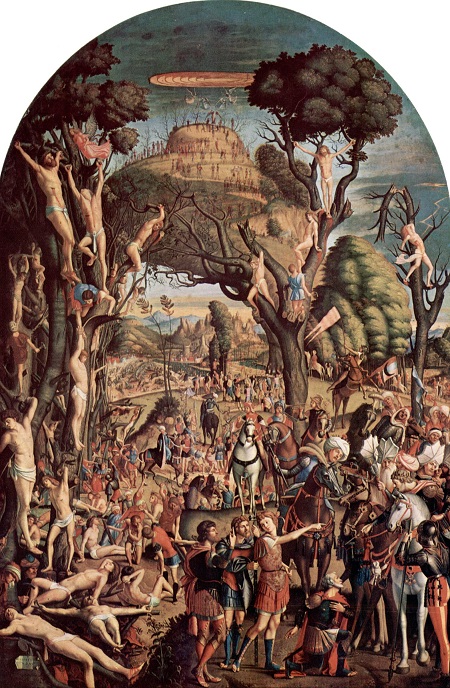 Carpaccio’s Ten Thousand Martyrs are just as many

Piled up with figures twisted in torture, Vittore Carpaccio‘s The Crucifixion and Apotheosis of the Ten Thousand Martyrs of Mt Ararat is a narrative cycle condensed into a single altarpiece. The canvas is filled with random episodes from the medieval legend about Roman soldiers who converted to Christianity and were then sent to die in a colonial outpost that once was Armenia. To its Venetian audience, the painting evokes the theme of countless wars with the Ottomans.

The Christian legend tells the story of a Roman legion which was sent to fight Armenian rebels during the reign of Emperor Diocletian. After an initial defeat, the soldiers converted to Christianity by an angel appearing from Mt Ararat and only then were able to prevail on the battlefield. Ordered to worship pagan gods, the soldiers refused – and were marched up the holy mountain and crucified en masse. Despite its dubious veracity, the event was hugely popular in Renaissance art.

Carpaccio’s take on the medieval legend draws on a wide variety of figurative representations which include a famous version by Albrecht Dürer. Without any particular compositional focus, Carpaccio’s dramatic scene stretches far into the distance all the way up the mythical Armenian mountain with a multitude of figures where the operational word is ten thousand: if one tried, one might almost be able to count ten thousand human bodies in various stages of martyrdom and crucifixion.

For Carpaccio who was known for cramming vast numbers of characters into his picture frames, the representation of ten thousand contorting bodies would have been a godsend. Equally for Venice of the early 16th century with several Ottoman wars having already been fought and many more to follow, the subject of a Christian triumph in the eastern Anatolia was a welcome diversion – an otherwise distant legend about Roman soldiers and pagan gods notwithstanding.

Originally painted for the now demolished church of Sant’Antonio di Castello, the altarpiece now hangs in the Accademia. It was commissioned by Francesco Ottobon, a prior of the monastery of Sant’Antonio di Castello who had a dream about the martyrs from Mt Ararat streaming into his church. One of the three churches torn down by Napoleon to make way for the public gardens, the painting’s home church is now survived only by a free-standing arch designed by Michele Sanmicheli.