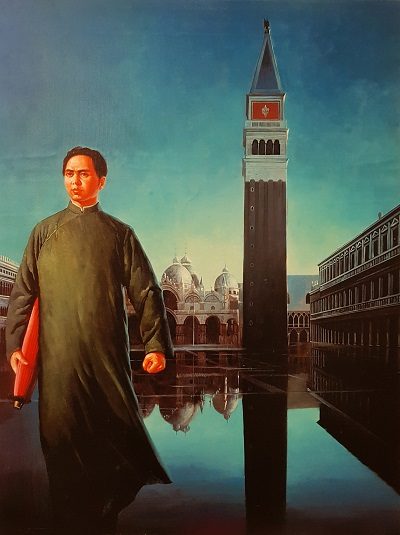 Venice sure gets its fair share of visitors, including some famous oddballs, but Chairman Mao is bound to take the cake. Mao’s stroll across a depopulated Piazza San Marco is, of course, imaginary and part of Erró’s Chinese Paintings from the 1970s. The flamboyant collages in which Mao triumphantly travels around the world as different civilisations and ideologies deliriously collide. This delightful portrayal of absurdity made a fabulous exhibition named Mao’s World Tour at Reykjavík Art Museum (Hafnarhús). The exhibition, in turn, made my day during my visit to Iceland.

Erró is Iceland’s most famous artistic export. Halfway between Surrealism and Pop Art, his technique consists of painting over preliminary montages of ready-made images, such as comics, advertisements, postcards and reproductions of masterpieces. These images he archives from all over the world to fuel his serial work, which includes politicians, celebrities and comic-book superheroes. Erró’s exclusive artistic medium is the collage where, reminiscent of American mass consumer culture of the 1960s, his figures clash with their new, incongruous settings for comic effect.

Erró was one of the first Western artists to work with the imagery of Chairman Mao. With over 130 works, his Chinese Paintings, tell the story of a great leader who tours the world. Each painting is based on a collage where Erró matches two images of different origins against each other: Chinese propaganda posters and Western postcards from famous places. This is fiction since in reality Mao only made two trips out of China, both times to Moscow. The presence of Mao in various locations is also a sarcastic reference to the wave of Maoism which seized groups of Western intellectuals in the 1960s.

In Venetian art, Erró’s depiction of the young Mao strolling across the city’s main square in a tunic would be a capriccio or an imaginary arrangement of architecture and figures in a new context. This is what Erró does when he juxtaposes different images against each other. The exact rendition of the Campanile, St Mark’s Basilica and the Procuratie Nuove could have been by Canaletto. It is a picture of serenity, with the empty square still wet from the rain or the receding acqua alta. It is also a supreme joke, with the face of the Cultural Revolution pictured in the world’s prime hub of culture.