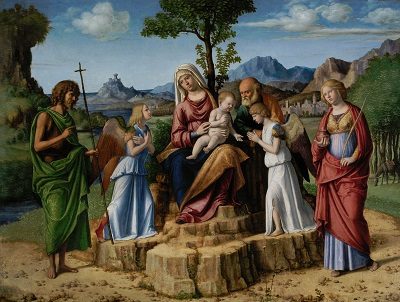 Cima da Conegliano, one of the leading painters of early Renaissance in Venice of the generation between Giovanni Bellini and Giorgione, never strictly made a landscape painting but it is for his landscapes that he is best remembered. The bulk of his artistic output were altarpieces, most of them featuring the Virgin with Child, but Cima was one of the first Italians to assign a place for landscape depiction and to formulate the laws of atmosphere and of the distribution of light and shade in doing so. Although Cima’s refined classical style was always capable of modest innovation, his greatest sin in the eyes of art critics is that it did not undergo any radical alteration during a career of some 30 years.

Even after Giorgione had introduced his revolutionary tonal reform, Cima continued with his own lines of expression – his figures statue-like and monumental in their firmness and his pastel colours richly limpid. Spaced with perfect harmony amid the sharp interplay of light and shade, Cima’s figures stand against the dreamy beauty of the countryside of the Veneto. His human figures and countryside always partake of the same sublimity. They are Raphaelite images of an uncorrupted and incorruptible world, of a timeless and mythically serene present. Cima’s style was distilled out of a melting pot of Antonello da Messina, Alvise Vivarini and Giovanni Bellini but never transgressed its own boundaries.

Cima, who shared Giovanni Bellini’s feeling for nature, nevertheless innovated in respect of his background landscapes. He painted them with a poetry capable of spanning centuries and therefore they are still relevant today. Their hills and stone formations contrasted against the intense depictions of dawn and sunsets forge man and nature into one. Bernard Berenson, an authority on the Venetian Renaissance, said of him: “No other master of that time paints so well the pearly light that models the Italian landscape with a peculiar lightness and breadth.” There is no question that Cima’s landscapes paved the way for Giorgione, Titian and the substantial period of Venetian painting of the 16th century.

A good example of this landscape poetry and my personal favourite is Rest on the Flight into Egypt which now hangs at the Calouste Gulbenkian Museum in Lisbon. This sacra conversazione with the restful figures, the clarity of light and the freshness of colour is one of Cima’s most serene works. With trusting simplicity, the Virgin, seated on a rock, offers the Child to the adoration of St John the Baptist, St Joseph, St Lucia and two angels against the backdrop of the Veneto. Through the transfiguring light shines the serenity of Cima’s figures and his countryside. This is a Virgilian evocation of the ancient world, executed – as always with Cima – with great sensitivity and consummate craftsmanship.