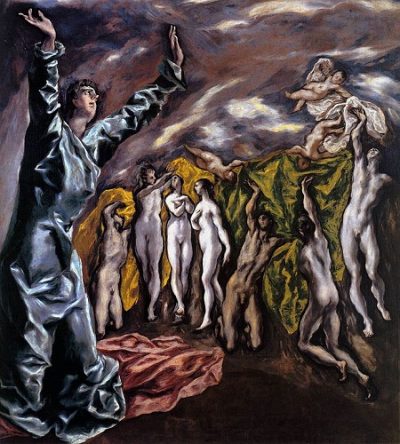 It’s strange today but Doménikos Theotokópoulos, better known as El Greco, was almost forgotten until the early 20th century. That’s when he was rescued from obscurity by an avid group of critics and artists who recognised this eccentric genius as a forerunner of modern art. Or did they? El Greco was known to be ultra-religious and his rapturous faith could easily make his paintings feel like records of imaginary encounters with the saints. Or he could also just be a textbook Mannerist painter.

Born in Crete, which at the time was a Venetian territory, El Greco was trained as a painter of Byzantine icons. At the age of 26, he decided to abandon a flourishing career on the island to become an Italian painter. This required a now mature master of Byzantine painting to acquire fluency in a naturalist Italian style. In Venice, where he spent about three years before moving to Rome, he promptly transformed himself into a disciple of Titian, Tintoretto, Paolo Veronese and Jacopo Bassano.

It was in Venice where he mastered the elements of Renaissance painting, including perspective, figural construction and the ability to stage elaborate narratives. His Venetian style comes fairly close to Tintoretto but that’s not where he was headed. It was also in Venice where he got the nickname El Greco, meaning the Greek, and it stuck. The curious form of the article, el, may be the Venetian dialect or a later Spanish addition since Spain was the painter’s next and final artistic destination after Italy.

El Greco was perhaps the first great religious painter since Fra Angelico. He meant it. He’s remembered for his criticism of Michelangelo‘s painting The Last Judgment in the Sistine Chapel for its apparent debauchery. And he’s also a painter of figures whose twisted bodies suggest religious ecstasy. But his wild distortions could also simply point to Mannerism, the style he shared with Tintoretto who was as manically disruptive in the way he strained bodies, exploded space and ignored the rules.

El Greco’s Mannerism is fiercely emotional in his refusal to paint anything objectively. His lack of interest in objective reality, natural colours and perspective is obvious in The Opening of the Fifth Seal, my favourite, which now hangs at the Metropolitan Museum of Art in New York. It depicts a prophetic passage in the Book of Revelation about the sequence of events at the end of time. It was an iconic work for 20th-century artists, including Picasso whom it inspired for Les Demoiselles d’Avignon.