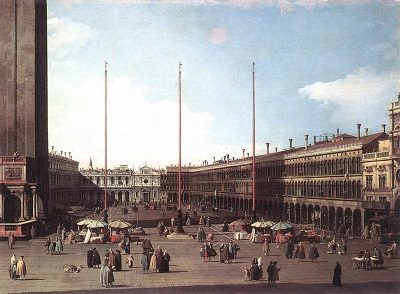 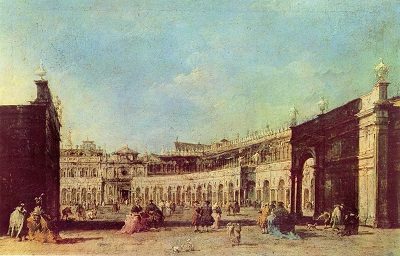 Sotoportego San Geminiano with the funerary plaque of Jacopo Sansovino on the pavement under the arcades of Ala Napoleonica – the Napoleonic Wing – is all that remains of San Geminiano, one of Venice’s lost churches and one of early documented examples of architectural vandalism. The classic beauty of San Geminiano now only survives in etchings and vedute of the Piazza San Marco painted before the demolition of the church in 1805 by the likes of Canaletto and Guardi.

Sansovino was a Florentine architect who is now best known for his works around the Piazza San Marco in Venice. Andrea Palladio, himself widely thought to be one of the most influential individuals in the history of architecture, considered Sansovino’s Biblioteca Marciana, the Library of Saint Mark’s facing the Doge’s Palace, to be the best building erected since classical antiquity. Similarly, Giorgio Vasari, in awe of Sansovino, published his biography in a separate volume.

Sansovino did probably more than any other architect to transform Piazza San Marco to become the heart of Venice as we know it today and “the drawing room of Europe” as it was reportedly described by Napoleon. It is a paradox that it was the same Napoleon who, through his Italian representative and stepson Eugène de Beauharnais, ordered the construction of the Ala Napoleonica opposite St Mark’s Basilica – and the demolition of Sansovino’s church which stood in the way.

The French occupying power which in 1797 put an end to the Republic of Venice required vast rooms for ceremonies, a monumental staircase leading into the newly created royal residence and an entrance onto the piazza itself. This was an early attempt to globalise Venice with the kind of neoclassical architecture that was alien to the city’s urban fabric but was necessary as a symbol of the new era. San Geminiano was the victim and its demolition took place to no small outcry, possibly because it came on the heels of Venice’s recent defeat.

Contrasting old and new buildings is always a balancing act and a test of architectural taste. There are those who claim that San Geminiano created a focal point to balance the formidable architecture surrounding the square. Tearing it down therefore amounted to architectural vandalism. But there are also those who argue that the church had been part of an asymmetrical ensemble and the Ala Napoleonica in fact completed the Piazza by giving it coherence and unity. To them, the church’s demolition was the necessary final touch to the square.

Although fairly small, San Geminiano was one of the best decorated churches in Venice and, according to the journals of the various visitors, it contained works of Tintoretto, Veronese and Bartolomeo Vivarini. The church’s importance, however, derived mainly from its architecture. Its façade, proportions and stylistic choices created an architectural conjunction between the Procuratie Nuove and the Procuratie Vecchie. Sansovino himself clearly thought enough of the church to choose it as his burial place.