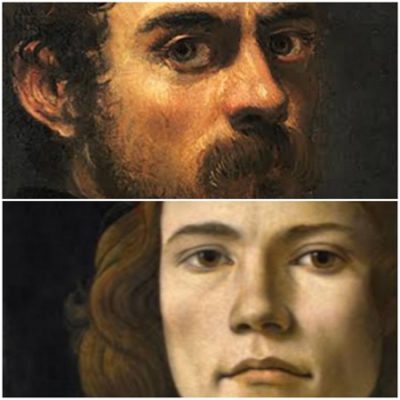 In Renaissance painting, in contrast to Florentine disegno, where “design” or “drawing” best approximates nature, stands Venetian colorito where “colour” and its judicious application best captures the look of life. Debates, or paragoni, about the relative merits of each of these artistic techniques go back to the Renaissance when similar comparisons were drawn between painting and sculpture. Back then and now, these paragoni were also expressions of campanilismo, the strong sense of local identity among Italians.

Giorgio Vasari, a Florentine artist, one of the earliest art critics and a local patriot, who is frequently accused of pro-Florence bias, described disegno as the foundation of all visual arts, based on the premise that clear lines define forms. Drawing, according to Florentines, was fundamental to the study of movement, human anatomy and the natural world. Florentine artists therefore developed their compositions in detailed preparatory drawings before transferring them to surfaces prepared for painting.

Unlike Florentines whose focus in all this was on hard contours and a sculptural quality of painted images, the Venetians preferred to work out their compositions directly on the canvas, using layered brushstrokes rather than line to define form. Broken contours and colouring in a mass of touches and modulations of tone are the Venetian answer to the taut and stony design of the Florentines. As a result, Venetian paintings show a greater interest in how light affects a human body and how colour will capture it.

When these two schools of painting stand side by side, Florentine colour, locked in between solid lines, appears more vivid than the palette used by Venetians where the process of blending colours seems to achieve a much greater richness. This is because for Venetians colouring was the closest aspect of painting to nature. In all its variety, colouring was the source of animation. In Florentine eyes, this quality stemmed not from colour but the muscular energy or movement of the figure captured in perfect drawing.

The main reasons for the differences between these two aesthetic approaches to painting probably come down to history and geography. Unlike mainland Italy where Florence is located, Venice has no obvious Roman ruins and the vast sculptural tradition this entails. And unlike the mainland, Venice’s art owes much to the Byzantines and their most prominent genre – the mosaic. The Venetian mosaics embody not only the Byzantine motifs but Venice’s unique love of rich colour and the effects of reflected light.

In Venice, light is reflected by the water of its canals and the Venetian painting has often been described as fluid due to its flowing colour rather than form. Such painting is in flux and the Italian word colorito really refers to a process of painting through the application of colour. The debate over the merits of drawing and colour is then a debate over whether a painting originates in the drawings made prior to its execution or in the more spontaneous experimentation with colour and the process of painting itself.