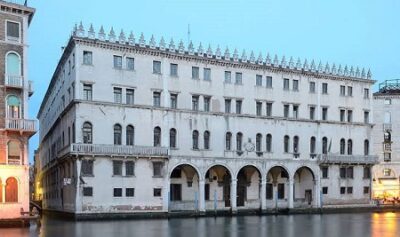 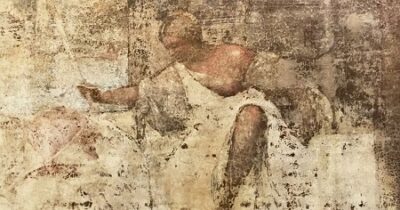 Twice destroyed by fire, Fondaco dei Tedeschi’s current incarnation dates back to 1508, though it was later repurposed by Napoleon, Mussolini and Rem Koolhaas. Originally built as the headquarters and accommodation for German merchants, the Grand Canal edifice overlooking the Rialto Bridge has also been a customs hall and a post office before becoming a lavish department store. Whatever the purpose, its location in the heart of the Rialto market has always assured it prominence.

The historic Fondaco dei Tedeschi was built in 1228 to serve, like Fondaco dei Turchi, as a warehouse for goods with restricted living quarters for German merchants, although the term also included Bohemia and northern Europe. On the ground floor, five arches enclose a portico where goods were unloaded from ships approaching along the Grand Canal while the upper floors offered accommodation, both long- and short-term, for those in Venice on business – about 160 merchants at a time.

Unusually for Venice, this is a building based on an expansive square plan. On the inside, four floors of colonnaded galleries rise up to line the vast central courtyard with a medieval well in the middle. The Koolhaas-led renovation has covered the courtyard with a steel and glass structure. The straightforward Renaissance façade, crenellated with merlons, features rows of single or double mullioned windows on the second floor which, at the upper floors, are paired by smaller quadrangular windows.

The front façade was originally frescoed by Giorgione and Titian but this proved to be a bad idea from the start. Within decades of their completion, the murals began to fade and the plaster on which they were painted started to flake off. “I know of nothing more harmful to fresco painting than the sirocco, especially near to the sea, where it carries salt moisture with it,” was Vasari’s comment on the marine conditions in Venice. Only fragments of the frescoes survive, now housed at Ca’ d’Oro.

After Napoleon’s conquest of Venice and the departure of Germans, Fondaco dei Tedeschi was converted into a customs hall, still upholding its role as warehouse of goods and accommodation for staff. During Mussolini’s time, it functioned as the city’s main post office until it was redesigned as a luxury shopping mall in the 21st century. The renovation wasn’t without legal challenges by conservationists, which objected to some modifications, but the result is unintrusive.