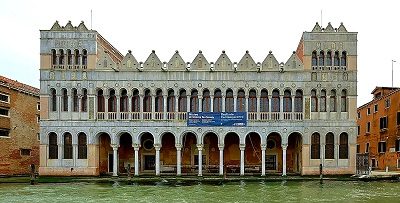 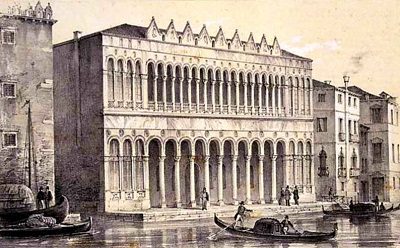 Fondaco dei Turchi, Venice’s historic lodgings of merchants from the Ottoman Empire, is considered to be one of the finest examples of the city’s early Veneto-Byzantine architecture. In reality, it is an example of Byzantine revival due to its large-scale 19th-century restoration. In 1860 the building, whose condition Ruskin only a few years earlier described in terms of “utter desolation”, was bought by the town council of Venice which restored it to its former glory and rebuilt the two side towers demolished in 1627. After the restoration it housed the Museo Correr (now located in the Piazza San Marco) and then from 1923 the Museo di Storia Naturale.

Venice whose wars with the Ottoman Turks never stood in the way of its trade with the Mediterranean Orient was the only European city to constantly receive Muslim dignitaries and traders. In 1612, the Senate decreed to welcome Turkish merchants, who had been present in the city for a long time, in a decent place. The choice was a palace built in 1227 on the Grand Canal. Acquired by the city in 1381, it was used to accommodate illustrious persons, including the Byzantine Emperor John VIII Palaiologos in 1438. The building was a fondaco between 1621 and 1838 when its last Turkish lodger Saddo Drisdi disappeared without trace.

At Venice’s Fondaco dei Turchi, the Ottomans would have felt very much at home since the whole concept of traders’ inns originated in the Muslim world. Already present in Achaemenid Persia, they are documented since the beginnings of Islam and spread widely under the Great Seljuqs of Iran to the entire Muslim world. Located along main trade routes, these structures offered accommodation to travellers and storage space for merchandise. The terminology which refers to them varies due to the large number of regions where they were erected but the Arabic word funduk is important here because the Venetian fontego and the Italian fondaco originated from it.

In addition to these Turkish merchant lodgings, Venice hosted other fondaci, including Fondaco dei Tedeschi for the German traders near the Rialto Bridge or Fondaco dei Persiani for the Iranians, now a hotel better known as the Palazzo Ruzzini. As a rule, the fondaci were situated perpendicular to canals for ease of access by boats. The ground floors were used for storage and as a place for washing. The upstairs floors were reserved for accommodation. This layout is remarkably similar to the historic traders’ inn in Cairo. The similarities between these buildings, erected on the opposite shores of the Mediterranean, are such that they resemble modern-day chain hotels.

The palace in which Fondaco dei Turchi was set up was characteristic of Veneto-Byzantine architecture of the 13th century. For Ruskin, this building was a paradigm of Byzantine style. The roofline crenellations in particular are characteristic of oriental influences inherent to Venetian architecture. The lateral towers were apparently taken down due to them being too ostentatious for a building lent to natives of an empire which was often in conflict with the Republic of Venice. The towers, along with the Veneto-Byzantine façade, were restored in a revivalist spirit by Frederico Berchet in the 19th century to recreate a building that Ruskin found so appealing.