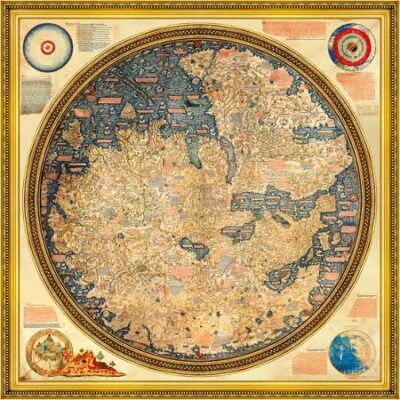 In the days before satellite imagery, Venice was a mapmaker’s paradise. Venetian and foreign traders and explorers passed through the city, providing anyone who’d listen with facts and tall tales about the world. Famous for his cartographic skills, Venetian monk Fra Mauro took advantage of this to create in 1450 what cartography experts now say may be the first modern world map. With surprising accuracy and insightful annotations, the Fra Mauro map reflects the geographic knowledge of his time.

In his youth, Fra Mauro travelled widely as a merchant and a soldier. Later he became a monk in a monastery on the island of Murano in the Venetian Lagoon where he also maintained a cartography workshop. Unable to travel as a monk, he would interrogate travellers with an inquisitiveness bordering on belligerence. He would cross-check their tales against books to draw and annotate his map, commissioned by King Afonso V of Portugal for Prince Henry the Navigator, the king’s uncle.

The Fra Mauro map is unusual with the south at the top, one of the conventions of Muslim maps. It’s presented as a circular planisphere, drawn on parchment the size of five square metres and set in a wooden frame. The original created for the Portuguese clients is now lost but a copy started by Fra Mauro himself is kept in the Biblioteca Marciana in Venice. In its detail, it’s comparable to Jacopo de’ Barbari’s map of Venice, made in 1500 and kept literally next door in the Museo Correr.

By combining various sources, Fra Mauro redefined the notion of sea away from the external border towards the centre of human activity. He was the first European to show that one could sail around Africa or that Japan was an island. By including stories of riches, unusual creatures and navigation routes, he didn’t just describe the world as he knew it but encouraged – as a successor to Marco Polo, a fellow Venetian – further exploration, leading up to the discovery of the Americas.

Notably, Fra Mauro wasn’t afraid to challenge the religious dogma of the day. With the Spanish Inquisition round the corner, 15th-century cartographers were anxious to conform. Fra Mauro, by contrast, took a strictly empirical approach: he relegated the Garden of Eden, shown by others in a geographic location, to a sidebox. Similarly, he took on classical authority: he noted bluntly that Ptolemy got the size of Persia wrong and didn’t realise that Africa was in fact circumnavigable.