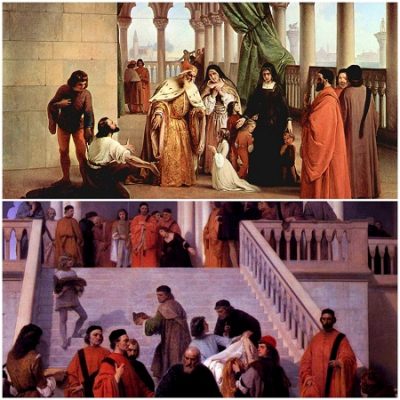 It’s a surprise to many that Francesco Hayez, the foremost painter of Italian Romanticism of the 19th century, was born in Venice. Having left his native city to study art in Rome and then make a successful career as an artist in Milan, Hayez is known for having no professional connection to Venice. For a Venetian-born artist this would have been unthinkable even a century earlier and it’s an indictment on Venice’s decline as the centre of creative arts after the loss of political independence during the 19th century.

Though famous for painting biblical and classical themes, Hayez was also interested in Italian history, depicting contemporary figures in historical settings. The Risorgimento, as it unfolded in the 1860s Italy, was one such setting for the artist. Hayez’s notable omission of Venice from his contemporary references ultimately reveals the city’s political irrelevance. After all, following its invasion by the Napoleonic forces in 1797, the once independent Venetian city-state was already an anachronism during Hayez’s lifetime.

To imagine what and how Hayez would have painted had he chosen to work in Venice, consider Ippolito Caffi. The foremost 19th-century representative and innovator of the Venetian cityscapes, or vedute, Caffi was an undeserved victim of the general interest in much earlier periods of Venetian art. Through artistic referencing of Canaletto and his contemporaries, Caffi’s vedute nevetheless create a credible, if romanticised vision of Venice, much like Hayez’s historical paintings would probably have done under similar circumstances.

This would have been a unique artistic turn for Hayez, even though his take on Romanticism as a style was unique already. The development of Romanticism in Italy was relatively slow, in painting as well as literature. Its principal characteristic was the attribution of historical significance to individual events, particularly those associated with the Risorgimento. Hayez never possessed the dramatic impetus, the expressive truth or the pictorial fury with which, say, Delacroix rendered the immediacy of historical events in his art.

Among Hayez’s many historical paintings, one can find a few with Venetian themes. My favourite is The Two Foscari (Palazzo Pitti, Florence), based on the account of the downfall of Doge Francesco Foscari and his son Jacopo. My other favourite, The Last Moments of Doge Marin Falier (Brera, Milan) is Hayez’s last historical picture based on the story of the only Venetian doge sentenced to death for plotting against the Republic. Both works are teasers of what Hayez could have accomplished in Venice had he chosen to stay there.