Frari: Church with who is who of Venetian art 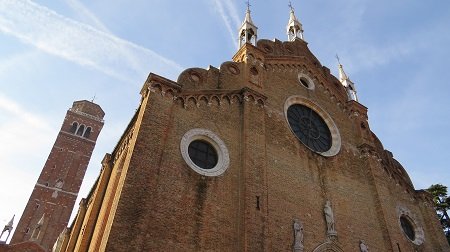 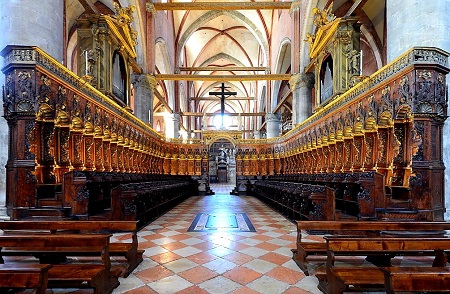 Frari: Church with who is who of Venetian art

As a Franciscan church, Venice’s Basilica Santa Maria Gloriosa dei Frari, or the Frari, has a suitably modest exterior. On the inside, however, the Franciscan ideals of poverty are challenged by a wealth of art. Descriptions of the Frari as a museum of Venetian art aren’t too far off the mark with Paolo Veneziano, Alvise Vivarini, Giovanni Bellini, Palma the Younger and Paolo Veronese all represented here. And then there’s Titian who painted the main altarpiece and is buried here.

The current church, built over an older one, took 150 years to complete between the 14th and 15th centuries. Built at the same time as the Dominican church of San Zanipolo, the Frari has an equally imposing Gothic brick façade and a portal with sculptures by Bartolomeo Bon. Unlike San Zanipolo, the Frari has a bell tower – the second highest in town after St Mark’s Campanile. Its foundations were reinforced after Venice’s tallest bell tower collapsed in the early 1900s.

The church interior is punctuated with twelve huge pillars representing the apostles. As in many other churches in Venice, the cross-vaulted ceiling is buttressed with wooden beams for stability. The Frari also features a wooden monks’ choir with 124 stalls. Just as impressive as the choir, which it separates from the nave, is the 15th-century marble screen by Pietro Lombardo. The adjoining monastery has two cloisters, one by Jacopo Sansovino and the other by Andrea Palladio.

The church’s art is dominated by Titian’s Assumption, which I have described elsewhere. No less impressive and just as innovative is Titian’s Pesaro Altarpiece where the Virgin and the Child are placed off centre to allow for a greater sense of movement through the painting as would become the norm in High Renaissance. My other favourite at the Frari is Giovanni Bellini’s Virgin and Child with Saints in the Sacristy. It has the same power to calm as the artist’s later San Zaccaria Altarpiece.

Like San Zanipolo, the Frari has some spectacular tombs, the most interesting of which is the pyramidal tribute to Antonio Canova. With only the sculptor’s heart buried here, the tomb is a copy of the memorial Canova himself created for a daughter of Empress Maria Theresa in a Viennese church. Opposite is the tomb of Titian, erected in the 19th century by Ferdinand I of Austria. Along with the Assumption and the Pesaro Altarpiece, it makes this ‘Titian’s church’.