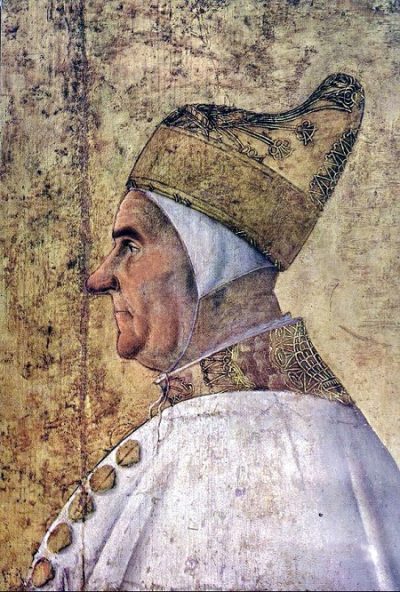 Gentile Bellini was the supreme chronicler of Venetian society of the 15th century. His paintings, full of historical detail, are of interest today as records of everyday life. His Miracle of the Relic of the Cross on San Lorenzo Bridge and Procession in the Piazza of San Marco portray a city where priests dive into the canals to rescue relics and where dignitaries parade before that multi-domed jewel casket, St Mark’s Basilica. Gentile is out to capture Venetian customs, values and power and his portraits do the same.

Portraiture wasn’t a major art in European culture during the Middle Ages. It was only in the 15th century that artists pioneered portable oil portraits that insisted on the individuality of the subject. When portraying Venetian doges, Gentile faced some stiff competition, not least from his own brother Giovanni Bellini whose Portrait of Doge Leonardo Loredan, now at the National Gallery in London, is considered to be the defining image of the Most Serene Republic at the turn of the Cinquecento.

Unlike Giovanni whose doge is a masterful depiction of the ascetic and brutally focused man that Loredan needed to be in order to climb his way up the greasy pole of Venetian politics, Gentile’s Portrait of Doge Giovanni Mocenigo is primarily an imposing portrayal of the doge’s office – a solid symbol of Venetian power and authority. Two versions of this portrait exist: a more polished one at the Frick Collection in New York and my favourite (pictured here) which now hangs at the Museo Correr in Venice.

The portrayed Mocenigo was doge of Venice from 1478 to 1485, during which time he fought at sea against the Ottoman Sultan Mehmet II and on land against Ercole I d’Este, duke of Ferrara, from whom he recaptured Rovigo and the Polesine. During his short reign, he also succeeded in concluding peace with the Ottoman Empire. Incidentally, Gentile who served as the official painter of the Venetian Republic was then sent to Constantinople as a sign of goodwill to paint his famous portrait of Sultan Mehmet II.

Using a few sharply defined lines and gold background, Gentile effectively renders this stark profile of an older man. The sitter is Doge Giovanni Mocenigo but it’s all the trappings of his office – a gold ducal hat, corno ducale, worn over a linen cap, an ermine cape and a ceremonial robe with ornate buttons – that the viewer registers first. The figure appears both regal and papal as the ruler of what was at this time arguably the richest city-state in the world and the second largest city in Europe after Paris should.