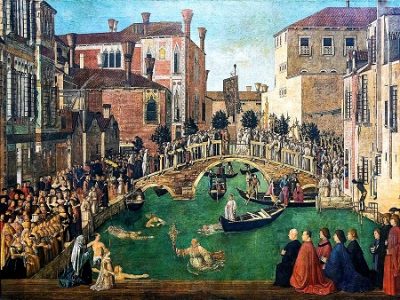 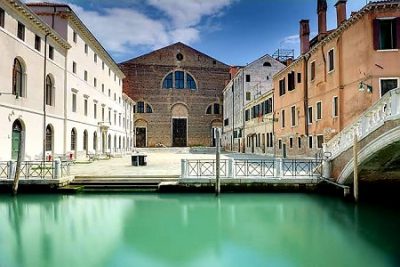 Gentile Bellini, the great chronicler of Venice, created paintings that are of interest today as records of Venetian life and architecture during the 15th century. On this score, his Miracle of the True Cross at the Bridge of San Lorenzo, now in the Accademia, doesn’t disappoint. Much like Gentile’s Procession in the Piazza San Marco, it was painted with painstaking attention to the smallest architectural detail, despite its distorted perspective, and crowded with small, rather rigid figures, including many portraits.

The canvas, along with Vittore Carpaccio’s The Miracle of the Cross at the Ponte di Rialto, is part of a cycle, teleri, depicting the miracle-working career of the fragment of the True Cross in Venice. The relic had been donated to the confraternity of San Giovanni Evangelista by Philippe de Mezières, chancellor of the Kingdom of Cyprus and Jerusalem in 1369 and soon became the object of veneration in the city. At least eight miracles linked to it were recorded in the confraternity’s books in the course of a century.

According to legend, the miracle occurred during the annual procession when the relic of the Holy Cross was carried from the Scuola Grande di San Giovanni Evangelista to the church of San Lorenzo. When crossing the bridge in front of the church, the relic was accidentally pushed into the waters of the canal by an over-enthusiastic crowd. The relic floated, miraculously eluding the grasp of all the faithful who dived into the canal to save it – all except Andrea Vendramin, the figurehead of the confraternity.

Although the scene is crowded, Gentile manages to capture a magically still moment with figures set in relief against the deep green of the waters of the San Lorenzo canal. The spectators include real people: Caterina Cornaro, Queen of Cyprus, kneeling on the stage on the left and Gentile himself, together with his brother Giovanni Bellini, in the group of gentlemen on the right. The buildings are painted with accurate colours and shapes, with some featuring the typical inverted cone chimneys of medieval Venice.

The miraculous atmosphere of Gentile’s setting can still be felt today. As you approach the bridge leading to the church of San Lorenzo – the alleged burial place of Marco Polo, the deep green of the waters in this near stagnant canal lingers on. The façades of the buildings all around undulate gently against the green surface of the canal. This is the essence of Venice. This is where the city reflects upon its own reflection in the water: Venice and its image in the water are inseparable – and Gentile Bellini knew it.