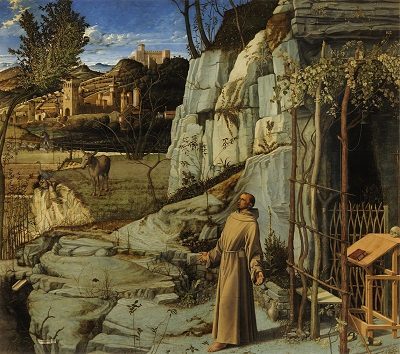 The spiritual force of Giovanni Bellini’s St Francis in the Desert is undeniable. The painting has been called the artist’s finest and – since it is the centrepiece of the Frick Collection in New York – also the greatest Renaissance work on display in America. The picture is of St Francis of Assisi, apparently in a religious ecstasy in the Umbrian countryside, stepping out into the light that appears to transfigure him. The artist is Venetian master Giovanni Bellini who regularly evokes a heightened sense of ambience and brings a humanistic quality to his religious scenes. By doing that, he embodies all the devotional gravity and much also of the worldly splendour of the Venice of his time.

The exact subject of the painting is uncertain. Alternatively labelled as Ecstasy of St Francis, it is depicting Francis in a religious ecstasy while receiving the stigmata (which are visible on his hands), according to Franciscan tradition, during a retreat on Mount Alverna in 1224. However, when this scene is portrayed in art, usually an angel, a seraph or a crucifix emitting rays is shown as well. It has also been proposed that Francis is seeking inspiration from the heavens as he is about to compose his Canticle of the Sun, according to another tradition, or that he is already singing this religious song. It is clear that the depicted scene has multiple resonances of meaning.

The same uncertainty extends to the painting’s setting. The landscape is filled with marvelous details — animals, birds, persons, plants, objects such as the skull and sandals, and strange rock formations — that would yield hidden meanings for those who understood their importance in Franciscan tradition. According to some, the cave from which Francis emerges serves to identify him with St Jerome and his legendary asceticism as the vehicle of salvation. Others have argued that the Umbrian countryside represents the Heavenly Jerusalem, the prophet Ezekiel’s vision of a physical city centred on the rebuilt Third Temple, which the Book of Revelation reinterprets to mean heaven.

Whereas the painted landscape was generally viewed as something that merely fills the space between figures in pictures, Bellini treated it with a new respect. His paintings of religious scenes often feature evocative natural settings that are as important and as the human subjects themselves. In St Francis in the Desert, the poetic role played by the natural world in the artist’s religious compositions is on full display: the landscape not only complements the religious subject matter but enhances the meditational nature of the painting. The natural world does add dramatic effect to the painted narrative, but there is also a sparseness to Bellini’s landscape that never overwhelms the action.

Influenced by a Flemish attention to detail and texture, Bellini was also an innovator in Venetian painting. Not only was he at the vanguard of developments in oil painting and, having dispensed of the egg and water tempera, he also advanced the Venetian colorito, especially in the play of light on the surface of the subject. In addition to his subtle rendering of Francis’s costume and skin pigmentation, Bellini was able to add to the meteorological ambience of the desert scene. The blue-green light cast on the Umbrian landscape may allude to the solar eclipse that occurred around the time the picture was painted, but this would hardly have been possible without Bellini’s mastery of colour.