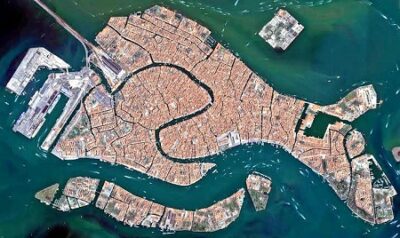 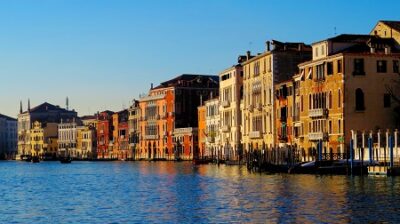 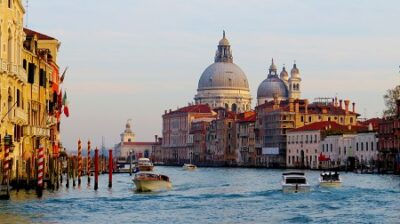 Venice’s main waterway – the Grand Canal, which traces a reverse-S course from the Santa Lucia Railway Station to the Piazza San Marco, is one of the world’s best urban thoroughfares. Its banks are lined with more than 170 palaces, churches and institutions, which date from the 13th to the 18th century, and show off the architectural greatness of the Republic of Venice. Most of the buildings emerge directly from water without pavement so one can, quite uniquely, only tour this majestic thoroughfare by boat.

The Grand Canal likely follows the course of an ancient river – possibly a branch of the Brenta – flowing into the Venetian Lagoon. It’s 3.8 kilometres long, between 30 and 90 metres wide, with an average depth of 5 metres, and connects at various points with a maze of smaller canals. In daytime, it’s a hive of busy traffic where traditional poled gondolas are now vastly outnumbered by motorised water buses or vaporetti, private boats, delivery barges and an occasional police or ambulance speedboat.

The former maritime trading empire that was Venice found in the Grand Canal a safe and convenient canal port. Several fondaco buildings combining the warehouse and the merchant’s residence still survive. In addition to the many Venetian traders’ homes, the Fondaco dei Turchi or the Fondaco dei Tedeschi once reflected the high number of foreign merchants working in Venice where the government supplied them with storerooms and lodging and simultaneously controlled their trading activities.

With the empire’s growing wealth, Venice’s main waterway also became home to its prime real estate. The noble families spared no expense in erecting and appointing, with the help of the best architects, suitable palazzi in the successive Venetian-Byzantine, Gothic, Renaissance, Baroque and Neoclassical styles. In addition to the countless private homes, the Grand Canal was also the site for Venice’s major administrative buildings, such as the Palazzo dei Camerlenghi or the Palazzo dei Dieci Savi.

Because most of Venice’s traffic flows along the Grand Canal rather than across it, only one bridge crossed the canal, at roughly its halfway point, until the 19th century – the spectacular and gravity-defying Rialto Bridge. Today the Grand Canal is bridged at three other points: The first Accademia Bridge built in the mid-19th century at the canal’s east end, the Mussolini-era Scalzi Bridge at the canal’s west end and the modern, Santiago Calatrava-designed Constitution Bridge near the entrance to the city.