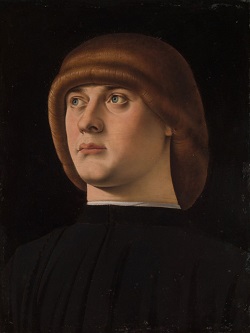 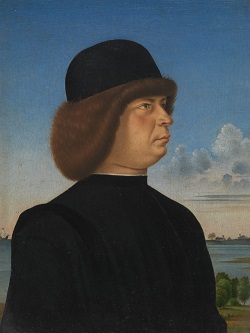 Jacometto Veneziano, a little known painter in Early Renaissance Venice, was mainly active as a manuscript illuminator and a portraitist. It’s his portraiture that now truly stands out, not least as proof that Jacometto was one of the Venetian artists most deeply influenced by Antonello da Messina‘s arrival in the city in the mid-1470s. Jacometto’s portraits are uniformly striking for their meticulous detail, highly refined technique and luminous, atmospheric landscape – or plainly tenebrous – backgrounds.

All of these attributes are conventionally linked to Netherlandish painting of Early Renaissance and, by proxy, to Antonello who produced similar portraits himself. This artist is also widely credited with the introduction of oil painting, a technique originating from the Netherlands, into Italy even as no documentary evidence exists that he ever travelled beyond Italian borders. Like Antonello, Jacometto would have been patronised by notable patricians and humanists whom he immortalised in his portraits.

Jacometto’s signature portraits are of Venetian men, young and old, recognisable by a helmet-like shoulder-length hairstyle called a zazzera (Italian for ‘mophead’). It was considered fashionable in Venice in the 1480s and 1490s when these portraits were painted. His portraits also show the subjects bust-length and in three-quarter view, sitting in the occhio e mezzo (‘eye and a half’) pose. Another distinctive feature is the subjects’ dark cloak and, sometimes, a berretto (‘cap’), typical of upper-class Venetian men.

Like other Venetian artists of the period, Jacometto sets his subjects against two types of background. His Portrait of a Young Man, my favourite which now hangs at the Metropolitan Museum of Art (the Met) in New York, is arranged against a dark background to emphasise the subject’s facial features as well as his auburn hair. My other favourite, Portrait of Alvise Contarini, now also at the Met, is rather incongruously set in a lush countryside that could only be found outside Venice on the Italian mainland.

After many centuries when generic representation had been the norm, Early Renaissance portraiture emerges with a distinct sense of reality. Jacometto’s portraits from Early Renaissance Venice show a clear intention to depict the unique appearance of a particular person. In addition to each portrait expressing individual identity, Jacometto also captures the moment: no upper-class Venetian man, young or old, would sit for a portrait wearing anything but a black cloak or sporting anything but a mophead.