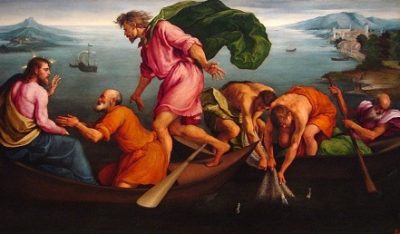 It all comes together in Jacopo Bassano’s pictures: his figures are choreographed around scenes with everyday activities and religious themes are detailed with animals and landscapes. Like in a ballet, Bassano’s subjects interact with highly charged emotions and in highly stylised postures and like in Sunday school, the artist brings biblical stories closer to the lives of ordinary people. It’s a wonder why this Venetian painter doesn’t compete on equal footing with the likes of Tintoretto and Veronese.

In Renaissance Venice where skillful marketing would make or break a reputation, Bassano’s only sin was to run a family workshop in his native mainland village of Bassano del Grappa whose name the artist, born Jacopo dal Ponte, also adopted. Many of his altarpieces were then painted for minor churches in the Venetian countryside which would seal his reputation as a provincial artist, not least in the eyes of Vasari, the famous biographer of Renaissance artists, who mentions Bassano only in passing.

Bassano’s party trick is his careful placement of figures to create a dynamic composition which leads your eyes around every detail of the canvas. Together with vibrant colours and animated figures, this is the essence of Mannerism and Bassano’s mastery of it makes him a supreme Mannerist. As an accomplished artist, Bassano is never afraid to experiment and he does so with expressive lighting, especially in nighttime as well as dawn and dusk scenes, and with his emphasis on figures of peasants and their animals.

My favourite Jacopo Bassano, The Miraculous Draught of Fishes which now hangs in the National Gallery of Art in Washington, is representative of all of these attributes. The picture places Apostle Andrew centre stage with his outstretched arms and a billowing cape, one of Bassano’s special effects. The central figure unites the two groups on either side: Christ and Peter on the left and Zebedee and his sons James and John on the right. Completing the scene are the struggling fish in the net and the Sea of Galilee all around.

Bassano’s colourful tableau, which extends across the width of this large canvas, captures the moment when Christ calls on Peter and Andrew – the fishermen brothers from Galilee – to join his ministry with the words “from now on, you will be fishers of men”. The choreography of the figures and their gestures and expressions unfolds with ballet-like precision. The subdued lighting at dawn, the flickering fish and the bucolic lakeside also join in this dance to Bassano’s tune under the artist’s expert brushwork.