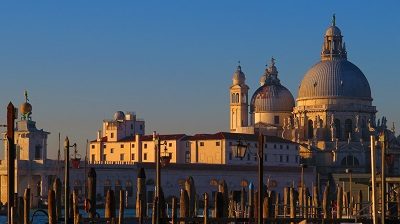 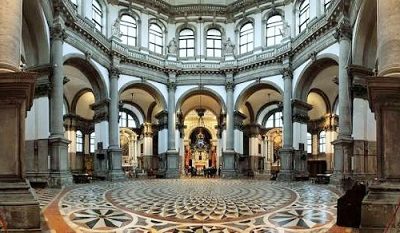 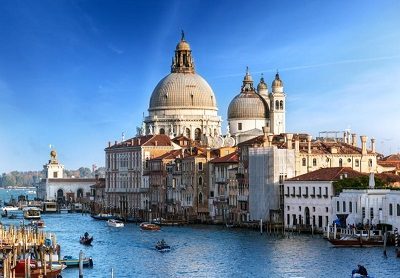 The two-domed votive church of Santa Maria della Salute, or just the Salute, at the mouth of the Grand Canal is one of Venice’s most instantly recognisable landmarks. It is a byword for Venetian Baroque and it has come to overshadow all else that was built in the city during the 17th century. It has since been immortalised on canvas by artists from Canaletto to Monet and continues to be captured on camera thousands of times every day. In fact, when trying to cross the Accademia Bridge, you need great perseverance to pass through the crowds taking the same picture of the rolling boat traffic on the Grand Canal against the backdrop of the Salute.

Its architect, Baldassare Longhena, is largely responsible for introducing Venice to the architecture of the Baroque era. This is a theatrical style characterised by bold explorations of form, light and shadow, gigantic proportions and dramatic intensity. With Baroque architecture, inside and outside, the eye is drawn upward, giving the illusion that one is looking into the heavens. That pretty much sums up the Salute, the construction of which occupied Longhena’s almost entire career. In this way, the Salute has come to define the epoch in which it was built as well as the career of the period’s most prolific architect.

Unlike in Baroque architecture in general, the Salute’s construction wasn’t a means to counter the Reformation and the Protestant Church with a new architecture that inspired awe but to celebrate the end of a disastrous plague that in 1631 claimed the lives of some 50 000 Venetians. The Salute was commissioned as a thanksgiving project dedicated to the Virgin Mary. Before church could even be started, a total of 1 106 657 wooden stakes, each measuring 4 metres and transported to Venice across the Adriatic, had to be driven deep into the barene (mudbanks) to shore up the tip of Dorsoduro. These reinforcements took two years and two months to complete.

Although the Virgin provided essential inspiration, the Salute drew from a range of architectural and spiritual traditions. Similarities have been noted between Longhena’s unusual octagonal-domed structure and the numerology of the Kabbalah. Longhena who was Jewish would have been well acquainted with the Kabbalah. Apart from the octagonal dome, the number 8 is said to be found everywhere else in the building as is number 11 when all measurements of the church taken in the Venetian foot (35.09cm). The sum of 8 and 11 is 19, which, according to the Kabbalah, denotes the Sun. For Christians this number is said to represent the Virgin Mary.

On the inside of the Salute, Longhena planned two spaces. Apart from the main octagon with eight chapels on the outer row, there is a rectangle with two apses. The gray and white colour scheme of the interior is a nod to Palladio. The decorative features on the columns are a Baroque novelty: they end in pedestals for imposing statues of prophets. The large dome of the Salute ecplises any other structure in Venice for dramatic effect. Light is used for the same end: it streams down into the interior and is reflected from the marble floor. In constructing this majestic church, Longhena plainly outdid every other Baroque structure in Venice, including his own other works.