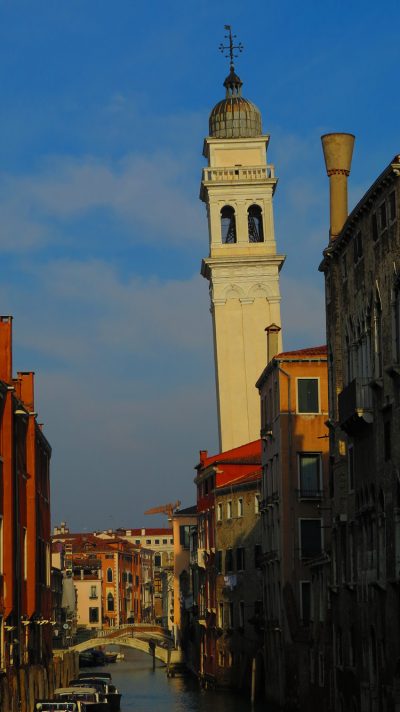 The Leaning Tower of Pisa has some stiff competition all around Italy as far as tilting bell towers go and Venice, unsurprisingly with its shifty foundations, counts as many as four such structures if you include one on the nearby island of Burano. The very design of freestanding church towers – or campanili, after all, runs against the guiding principles of Venetian building techniques which demand the avoidance of very high concentrated loads upon the city’s subaqueous wooden piles.

My personal favourite in Venice is the 44-metre Campanile di San Giorgio dei Greci, designed by Simone Sorella and completed in 1592. It apparently started tilting from the beginning of its construction. Its inclination can best be seen from the bridge over the Rio dei Greci, close to the famous Bridge of Sighs. Like its adjoining church, which itself is freestanding – something of a rarity in Venice, the bell tower was built by and for the Greek community in Venice, primarily sailors and merchants.

The church was financed by taxing all the Greek ships arriving in Venice. It was built in a Renaissance style reminiscent of Sansovino, largely by Sante Lombardo and finished by Giannantonio Chiona. The church’s cupola was designed by Chiona and not Palladio, as has been claimed. The adjoining late-17th century buildings are by Baldassare Longhena, including the museum of Byzantine icons. The wall along the canal is also by Longhena and it still encloses a quaint courtyard with two fine well heads.

Then there is the 66-metre Campanile di Santo Stefano, located not far from the Ponte dell’Accademia. It is one of the highest bell towers of Venice, with an inclination is similar to that of the Tower of Pisa, about 2 metres, best visible from a nearby Campo Sant’ Angelo. Since 1544 when it was completed, it has repeatedly been struck by lightning and rattled by earthquakes, once even collapsing entirely onto nearby houses. It was rebuilt and its base reinforced but it’s still said to be unstable.

Its adjoining church is a masterpiece of central Gothic, acknowledged as such even by the ever grumpy John Ruskin. The fine gothic doorway from Campo San Stefano is attributed to Bartolomeo Bon and the richly-decorated ship’s keel roof of the church was probably made by the city’s legendary shipbuilders in the Arsenale. The church’s interior is one of Venice’s most solemn and memorable. The sacristy is packed with some first-rate Venetian paintings, including a large Last Supper by Tintoretto.

The third visibly leaning bell tower in Venice, Campanile di San Pietro, is a little off the beaten track on the island of Olivolo which was once the easternmost part of the city. It is hard to imagine that this church was the home of the Venetian patriarch and that it remained the see of the bishop of Venice, the cathedral of Venice, up to the fall of the Republic when this function was transferred to San Marco in 1807. Its architectural grandeur, based on a design by Palladio, certainly attests to this.

The 54-metre campanile itself stands in one of the few campi in Venice which is still grassed over. Over centuries it was damaged and partially collapsed in a fire, a storm and lightning until it was rebuilt in its current form in 1490 by Mauro Codussi. Faced with Istrian stone, it is the only stone-clad campanile in Venice. Last restored in 2000, it still leans to the East. In a late 19th century oil painting by Félix Ziem – Leaning Tower of San Pietro, Venice, the campanile is seen leaning at a somewhat astonishing angle.

Even further off the beaten path and some distance from Venice on the island of Burano, famous for its colourful houses, stands the lean and leaning Campanile di San Martino. Its adjoining late 16th-century church has no façade as it abuts onto houses. Like the 53-metre campanile, the church is said to be the work of Andrea Tirali. The best location to admire the tower’s tilt is on the nearby Terranova’s marble bridge. Given how precarious it really looks, it’s best to visit sooner rather than later.

The gentle realism of this particular scene at the Bacino di San Marco as seen from the Piazzetta also defines Canaletto as an heir to the legacy of the great Renaissance masters of atmospheric depiction. In this picture, one gets a clear sense of real persons engaging in real-time activities and conversations. After all, much of the artist’s preparation work in the early years was said to be carried out ‘on location’ rather than in the studio. This is an artistic predilection that was considered highly unusual for Canaletto’s time and it is also rarely seen in the artist’s enormous oeuvre.