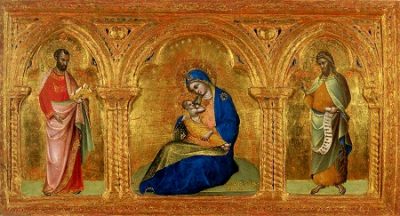 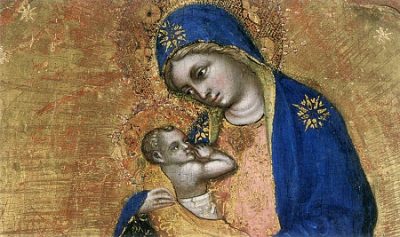 A remarkably inventive artist, Lorenzo Veneziano was the leading Venetian painter of the second half of the Trecento. As an artist, he would oversee the decisive move towards the Gothic style, turning away from the old-fashioned Byzantine models that had dominated Venetian painting. His ornate, colourful and animated panels show a fresh naturalism, a fluency of draughtsmanship and a vitality in figure poses that had never before been seen in Venetian art. Lorenzo’s impact was both widespread and profound.

Lorenzo may have trained in the workshop of Paolo Veneziano, the father of Venetian art rooted in the Byzantine tradition, which Paolo was only beginning to redefine in the direction of the new Gothic style. While the proportions of Lorenzo’s figures are still Paolo’s, his faces and draperies are more individualised and expressive. Lorenzo was also receptive to the influences of other artistic centres where he was active, such as Padua, Verona and Bologna. His work was in as much demand there as it was in Venice.

Lorenzo’s Madonna of Humility with Sts Mark and John the Baptist, my favourite, which now hangs at the National Gallery in London, shows how diffuse his style is. While Lorenzo’s figures here are proportioned much like Paolo’s would have been, he moves away from the Byzantine symbolism of the Hodegetria where the Virgin merely gestures towards the child to show him the “way” (hodos in Greek). Lorenzo’s instead goes for a more Gothic representation emphasising the tender relationship between mother and child.

Lorenzo’s rendering of the bond between the mother and child highlights his penchant for naturalism. His baby Jesus isn’t entirely a homunculus, a miniature adult, but has mannerisms of a child, something derived from first-hand observation and real life, which was innovative in the context of Venetian art. Similarly, Lorenzo’s figures here are less elongated and more compact, modelled with great delicacy. His use of light and detailing of the brocaded garments also make this a transitional work par excellence.

Lorenzo’s artistic transition is clearly outward. Despite his apparent indebtedness to Paolo Veneziano when it comes to basic composition, Lorenzo employs a more progressive artistic response to his Venetian precursor in terms of execution, colouring and ornamentation. His innovations seem inspired by Paduan interpreters of Giotto, particularly by Guariento di Arpo whose iconic compositions of Madonna with Child came with a devotional impact big enough to help establish the International Gothic style in Venice.