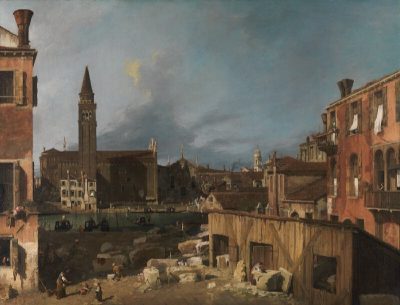 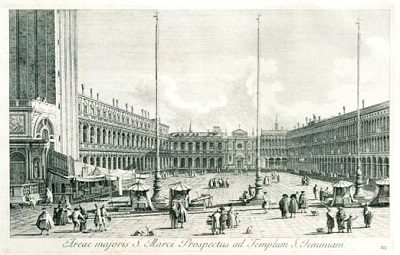 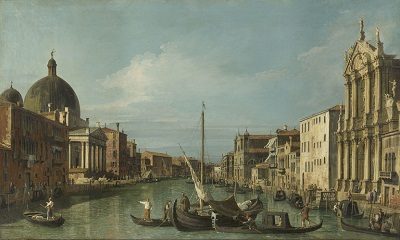 In the absence of pre-1800s photography, view paintings, or vedute, now serve as visual proof of Venetian buildings that no longer exist. In their 18th-century heyday, the aspiration of vedute to give a topographically exact depiction of Venetian cityscapes was a measure of their quality. The vedute esatte of Canaletto and his contemporaries aimed to bring back vivid memories of the city to those who commissioned or purchased them during the Grand Tour, a trade mission or a diplomatic posting to the Republic of Venice. Nowadays these same view paintings possess unique documentary value for historical research of places for whose existence no other evidence survives.

As one of the best preserved historic cities, Venice has a reputation for being static, a city frozen in time. There’s an illusion that when things collapse, as they invariably do in Venice’s lagoon topography, everything is rebuilt to its original appearance. The story of St Mark’s Campanile, which famously collapsed in 1902 and was rebuilt as a replica of itself, is an oft-cited example. After the tower fell, the city held a design competition to select its new design. Venetians did a bit of protesting, using the familiar phrase, com’ era, dov’ era (as it was, where it was) as their slogan for not wanting something modern to be erected in the tower’s place. It proved to be a winning argument.

The “com’ era, dov’ era” dictum clearly didn’t apply when another Venetian campanile collapsed in mid-18th century. The bell tower of the later deconsecrated church of Santa Maria della Carità, which now houses the Accademia, features prominently in Canaletto’s iconic 1735 veduta – The Stonemason’s Yard. The campanile collapsed in 1744 and was never rebuilt. Speaking of architectural changes, the building adjoining what was then the Scuola Grande di Santa Maria della Carità was also torn down and the Accademia Bridge which now spans the Grand Canal at this point didn’t exist then. To many who look at this picture today will find the Venetian cityscape it portrays unfamiliar.

In the case of Church of San Geminiano, the argument isn’t about rebuilding to recreate the original but about rebuilding to replace. The San Geminiano familiar from 18th-century vedute was Sansovino‘s work of 1557. The church was torn down in one of the first documented instances of architectural vandalism in 1805. The Napoleonic architects built a new royal residence and created a link between the Procuratie Nuove and the Procuratie Vecchie. Perhaps the most famous veduta of it is Canaletto’s 1735 Piazza San Marco, looking toward San Geminiano, popularised by Antonio Visentini‘s etching, Piazza San Marco toward San Geminiano, after Canaletto.

By far the most infamous demolition in Venice and one that uprooted an entire community is that of the Convent and Church of Santa Lucia. The nuns had been removed in 1806 by the Napoleonic decree and St Lucy’s remains were moved to the church of San Geremia. The complex was demolished in the 1860s by the Austrians to make way for a railway station. This station was replaced by the current design in 1954. The old neighbourhood survives in a 1726-1727 Canaletto veduta, The Grand Canal looking west with the Scalzi and S. Simeone Piccolo. The two churches are adjusted for effect to face each other but of real interest is the part of Venice that no longer exists.