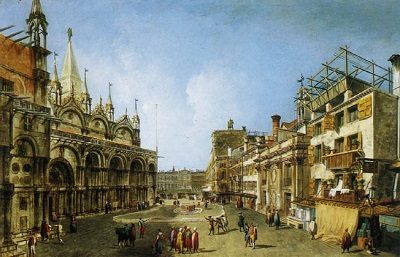 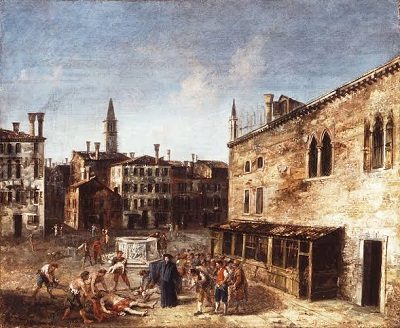 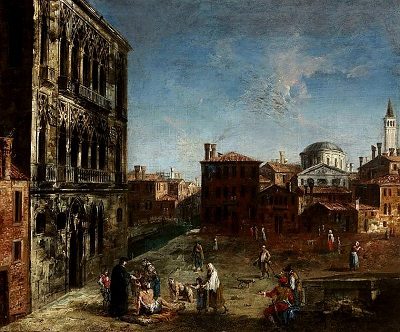 The conventional view of Canaletto vis-à-vis his rivals is that Canaletto had none. This is certainly true when 18th-century Venetian vedutisti are measured by their commercial success. But when it comes to questions of style and technique, things aren’t quite so clear cut. The vedute of Michele Marieschi, Canaletto’s contemporary, offer the same topographical views of Venice’s landmarks but they also come with a more spirited and atmospheric handling of the brush and a more vivid palette. This is obvious from the three Marieschis in the collection of the Museum of Fine Arts in Budapest.

Curiously, Hungary’s premier art museum, housed behind a magnificent eclectic-neoclassical edifice and built around the country’s former royal collections with additions from the legendary Esterházy and Zichy estates, has no Canaletto but three Marieschis. They include The Piazzetta dei Leoni in Venice, The Death of Pietro Candiano IV, and Doge Giovanni Gradenigo Distributing Alms. Their dating – 1735-1736 for the Piazzetta and 1731-1733 for the other two – is vague, as expected, since the chronology of Marieschi’s paintings is notoriously difficult to establish due to his undated early works.

All three are fairly representative of Marieschi’s oeuvre, with the two early pictures being essentially capricci or fantasies that blend buildings with people and scenes in imagined Venetian settings and the later work being a more topographically accurate veduta. This corresponds with what little we know about Marieschi: he was initially influenced by the cappricio style of Luca Carlevarijs and later turned his attention to view paintings, under the influence of the history painter Gaspare Diziani, his tutor, and undoubtedly encouraged by Canaletto’s growing success in this field.

When contrasted with Canaletto, Marieschi’s use of paint seems livelier and fresher. But Marieschi is also seen as more superficial. Comparing the same views by the two artists side by side, it’s often clear from the straight horizon lines and perfunctorily painted buildings in Marieschi’s pictures that he relied on a camera obscura whereas Canaletto’s shorelines tend to curve naturalistically into the distance while he also pays greater attention to details. Possibly because of these differences, Marieschi was a much faster painter who was able to turn out more paintings more cheaply.

Despite this, Marieschi’s vedute were routinely being passed off in Venice of the day as Canaletto’s which in itself is a reflection on the republic’s robust but rather superficial art market of the 1700s. In addition to Grand Tourists from Northern Europe, the art market attracted merchants and diplomats who came from everywhere else. Not all of them would have been discriminating buyers. This lax attitude to quality wasn’t helped by the fact that the very notion of originality, of a unique point of view, was virtually a non-issue in the 18th century.

When several artists painted the same veduta, they weren’t aiming for a unique angle. Instead, they differentiated themselves through brushwork, colour or light. Those after well-rendered figures would likely buy a Carlevarijs and those wanting atmosphere would choose a Canaletto. And those after bright colours would go for a Marieschi, Canaletto’s closest rival for a time until Marieschi’s prolific career was brought to an abrupt end at the age of 33. This is probably how the three Marieschis ended up in Hungary. Whoever acquired them must have preferred them to the competition.