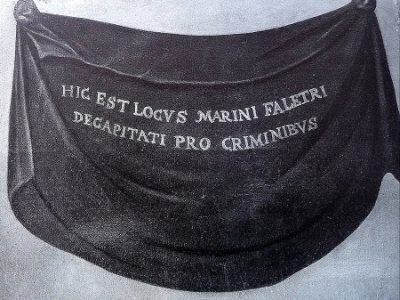 In the main hall of the Doge’s Palace, there’s a frieze with portraits of the first 76 doges of the Venetian Republic. The depictions of rulers prior to the Great Fire of 1577 must be imaginary while one of them, that of Marin Falier (or Marino Faliero in standard Italian), is missing altogether with its panel painted over with a black shroud. The only doge who was thus airbrushed from history was beheaded for attempting a coup against the Venetian aristocracy in order to replace elected office with dynastic rule.

Before being elected doge, Falier had been a career politician and a rather distinguished one. Two of his relatives had held the elected office before him and he himself had been a member of the Council of Ten, commanded Venetian land and naval forces against Genoa and Hungary, acted as governor of provincial towns, and served as Venice’s ambassador to the papal court at Avignon. It was during this last diplomatic mission that Falier learned of his election in abstentia to the office of the doge.

Unlike his previous career, Falier’s brief, six-month tenure as the doge, or dogato, was disastrous. A fresh rout of the Venetian navy by the Genoese forces and the humiliating truce that he negotiated aroused the hostility of the aristocrats who engaged in a power struggle with the doge. Falier was forced to accept major limitations on his powers and endure a public insult by an aristocrat who alleged that the doge had to pay for his attractive and much younger second wife while other men enjoyed her.

Whether Falier acted to defend his honour or was being consistent with a trend in Italian city states to move away from oligarchic government towards absolute rule, he led a plot to kill all the nobles. The plot, however, leaked to the Council of Ten which acted with ruthless efficiency. When confronted, Falier admitted his guilt and was beheaded inside the Doge’s Palace. His corpse was shown to the Venetian public before being buried in an unmarked grave, with the severed head between the knees.

Each of the doges’ portraits in the Doge’s Palace has a cartouche with the summary of the key events of each dogato. Falier’s panel with its black shroud reads in Latin: Hic est locus Marini Faletri, decapitati pro criminibus (This is the space reserved for Marin Falier, beheaded for his crimes). The story of this traitor to the Venetian Republic has inspired literature, music and art. Lord Byron made it into a play, Gaetano Donizetti adapted it for an opera while Eugène Delacroix and Francesco Hayez painted it.