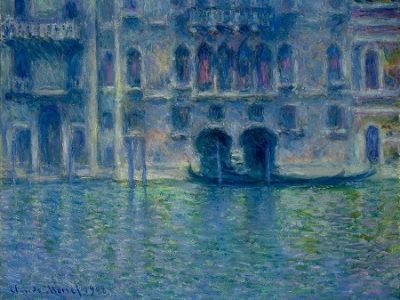 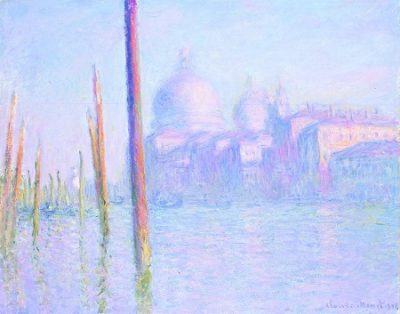 It’s true that Claude Monet approached Venice – a subject that others had already painted so many times before – with trepidation. In the autumn of 1908, at the age of 68, he makes his sole journey to the city where he remains for 10 weeks. He turns out 37 paintings where images, many of which had been reproduced on postcards and tea towels, appear fresh: the blue-green waters, hazy skies and pearly fragments of Venice that melt into the sky above and, in their luminous reflection, into the canals below.

The style of Impressionism, of which Monet is a key exponent, means that colour and the light that created it are always at the forefront of the painted image. Objects and figures themselves take a back seat and the manner in which the sun or the moon bathe them in different types of light are of key importance. Monet was known for wanting to capture nature as it appeared to him at the moment. He would often experiment with light and shadow and how they changed during different times of the day.

Unlike the original Venetian view painters before him, including Canaletto, Marieschi, Guardi or Bellotto, Monet showed less interest in representing famous monuments in their architectural detail than in capturing the play of light and reflection on the city’s waterways. Venice seemed an ideal subject given his enduring fascination with watery surfaces which allowed him, like the garden pond at his home in Giverny in his Water Lilies series, to utilise vivid colour and varied brushwork to dazzling effect.

Similarly, Monet saw buildings merely as surfaces for flickering effects of light and shade. He famously chose Rouen’s celebrated medieval cathedral as a mirror for reflecting daylight. In Rouen he also perfected the old habit of studying the same subject, in this case the cathedral, in a varying light, at different times of the day, which would result in his many distinct Rouen Cathedral series. He had a preference for strong colours which he wouldn’t mix but rather paint onto the canvas in short brushstrokes.

Monet’s 37 paintings of Venice include my favourites – the Grand Canal and the Santa Maria della Salute series. His cropping is often so radical that the paintings put you right in the middle of the Grand Canal or the Guidecca Canal, watching the buildings dissolve in varying daylight. And with their reflection dancing on the water below, dissolve they do into the hazy skies above. Monet’s Venice thus bathes not only in its waterways but in the light and shadow they create onto Venice itself.