Pala d’Oro: Venice’s best mosaic of the East and West 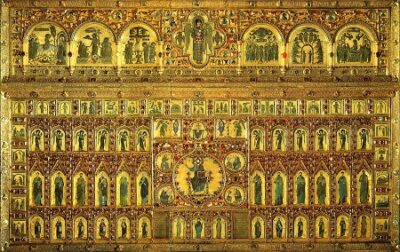 Pala d’Oro: Venice best mosaic of the East and West

In the city of big names, one of Venice’s best artworks is a piece by an anonymous goldsmith from the 12th century. The piece is the Pala d’Oro – a large altar screen in St Mark’s Basilica made with gold, enamel medallions and precious stones – and its present appearance dates from 1342 when Doge Andrea Dandolo ordered the last round of work on the panel. In addition to enamels painted by Byzantine and Venetian artists, its various parts were spoils from Constantinople from the infamous Fourth Crusade.

The Pala d’Oro is actually a retable – a structure placed behind the basilica’s high altar. With some 250 cloisonné enamels of different sizes and epochs on sheet gold and with countless pearls and precious stones set in the enamels, it remains the world’s only intact example of large-size Gothic goldsmith’s art. It’s considered to be the most refined expression of the Byzantine cult of light which celebrates the raising of man towards God. It also glorifies St Mark the Evangelist whose relics it contains.

The enormous panel is composed of three parts. The lower section was commissioned in Constantinople in 1102 by Doge Ordelaffo Falier who is also portrayed in one of the enamels below Christ holding open the book in which the words of holy scripture are represented by gems. The upper frieze with the Archangel Michael in the centre came from the monastery of Christ Pantocrator in Constantinople and arrived in Venice as loot from the sack of Constantinople during the Fourth Crusade in 1204.

The third and final intervention started in 1343 when, at Doge Dandolo’s behest, Venetian goldsmiths framed the panel within a Romanesque (upper part) and a Gothic arch (lower part), and distributed its 1927 gems. Dandolo also commissioned Paolo Veneziano to paint the Pala Feriale – the wooden container for the Pala d’Oro – to cover the altar screen on weekdays to be only unveiled on special days. Veneziano’s cover depicts St Mark and other saints and is now in St Mark’s Museum.

The sight of the Pala d’Oro is truly awe-inspiring. It’s both the masterpiece of Byzantine metalwork of the 12th century and Venetian painting of the 14th century. It effortlessly combines the best of artistic traditions of the East and the West. As the ultimate mosaic of Christian saints, angels and figures from the Byzantine and Venetian history, it creates a compelling narrative where theology, legend and history tell a great story – one from which the real Venice comes out as a myth.