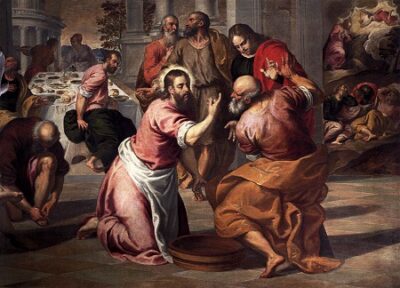 Iacopo Palma, also called Palma the Younger to distinguish him from his great uncle Palma the Elder, is now best known for his blend of naturalism and Mannerist exaggeration. He painted prolifically in Venice at the time of Titian, Veronese and Tintoretto. Having incorporated Titian’s emphasis on light, Veronese’s loose brushstroke and Tintoretto’s figure postures, he eventually – being of later generation – outlived the great masters to dominate Venice’s art scene into the 1600s.

Despite being born into a Venetian family of artists, which included the renowned Palma the Elder, he was virtually self-taught. Palma had a knack for finding generous patrons, initially the Duke of Urbino whose patronage allowed him to work in Rome where he embraced the practice of making preparatory drawings (disegno), a custom that was associated with central Italy. Later on, he was often employed in Prague by the Habsburg emperor Rudolph II, a noted art connoisseur.

Adding naturalism to his Mannerist style, Palma varied the degree of exaggeration according to his patrons’ tastes. He also applied the idyllic vision of Giorgione in colour and soft-focus effects. Palma’s particular refinement of this technique was his use of transparent glazes, most of which later deteriorated. His finest works feature monumental figures, loose technique and light tonality. Like his great uncle, Palma also developed a range of ideal feminine figures.

Palma’s best works are found in Venice where he worked continuously from the mid-1570s. His first major public commission in the city arrived after the Great Fire of 1577 in the Doge’s Palace: with three canvases for the ceiling of the Sala del Maggior Consiglio. Its immense flat ceiling was constructed with gilded cornices as frames for paintings. Palma’s canvases, like those by other artists, depict the glorification of Venice through its military forays in the East and on the Italian mainland.

Palma’s take – and my favourite – on Washing of the Feet, a well-known biblical narrative, now hangs in Venice’s church of San Giovanni in Bragora. Usually a companion piece to the Last Supper, this canvas depicts three separate episodes (Last Supper, Washing of the Feet and Prayer in the Garden) in a single image. This is a perfect Mannerist device for Palma’s carefully divided configuration of expressions and gestures with Jesus kneeling in the centre with a towel wrapped around his waist.