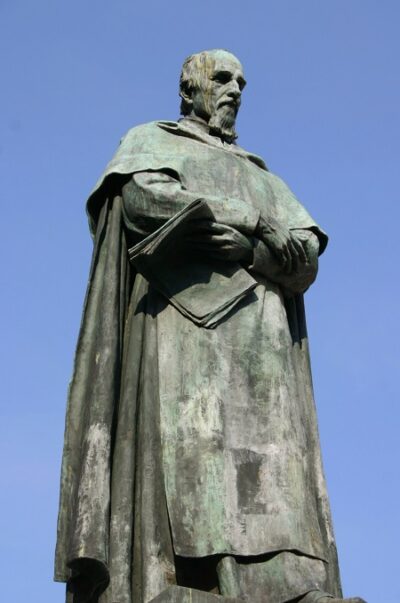 Once described as “a Protestant in friar’s clothing”, Paolo Sarpi – one of the most eminent Catholic theologians of his time – became notorious as the defender of Venice against the papacy during the Venetian Interdict of 1606. As a historian who saw that religion might be used as a cloak for political designs, he also authored a controversial history of the Council of Trent decrying papal absolutism. Among Italians, he is an early advocate of the separation of church and state.

Born in Venice, Sarpi had a distinguished academic career in theology but also in mathematics and entered a monastic order. He made important friends, including with Galileo Galilei whose condemnation by Rome he sharply criticised. As a theologian, Sarpi wrote in a clear, witty style and argued not from rigid legal standpoints but from the evident facts of history. In the best Venetian anti-papal tradition, he constantly argued that the pope’s power should never exceed that of St Peter.

Sarpi confronted Rome head-on during the Venetian Interdict of 1606 from his official position of theological counsellor to the Republic of Venice. The confrontation resulted from Pope Paul V’s demand that Venice hand over to Rome two criminal priests, one charged with murder, whom the Venetians intended to try before civil courts. When Venice refused, the pope excommunicated the Senate and Doge Leonardo Donato and debarred all Venetian priests from their functions.

Sarpi’s arguments were key in sustaining Venetian morale and in winning sympathy abroad. The pope had an ally in Spain, then dominant in Italy, and when he threatened recourse to arms, Venice secured the support of France and even threatened to call on Protestant countries. Finally the pope, fearing Venice would become Protestant, agreed to settle. The pope, however, plotted to assassinate Sarpi in an incident on Campo Santa Fosca in Venice, which he survived.

As a hero who had defeated the pope and survived his assassins, Sarpi went on to write a strongly anti-papal History of the Council of Trent, which made it onto Rome’s index of prohibited books. Written with one eye on the Protestants, whom Sarpi saw as Venice’s allies against Rome and Spain, the work offered Protestant writers proof that their arguments against the Church of Rome were well founded. As a theologian, Sarpi gained a strong acceptance in Protestant northern Europe.