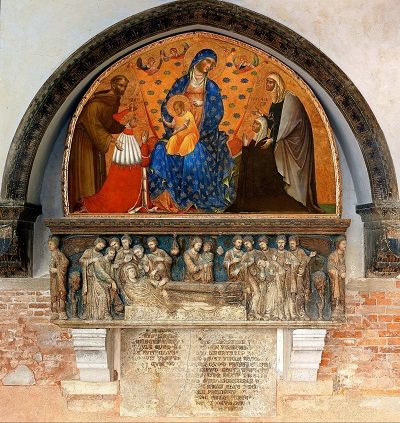 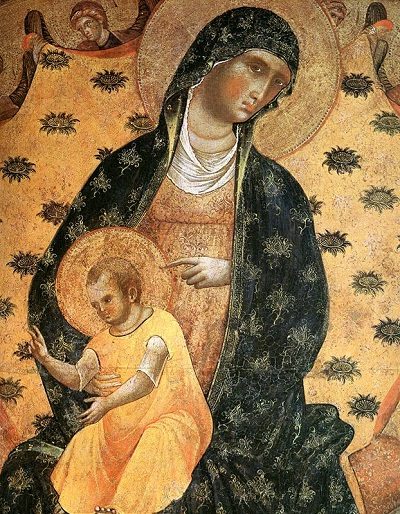 It is a credit to Paolo Veneziano, the principal painter of the Byzantine style in 14th-century Venice, that despite his repetition of subjects and figures in a consistent idiom, he became the most innovative and the first distinctive Venetian painter and indeed he founder of the Venetian school of painting. His many signed and dated works fall within the documented period of 1333 to 1358, during which he was regarded as the official painter of the Venetian Republic. Apart from his prolific output, Veneziano’s active period was marked by a fluidity of style and he is today seen to be almost solely responsible for the transition of Venetian art from its Byzantine roots to its own distinctive Gothic style.

Paolo’s early style, informed by Byzantine mosaics, is full of static compositions, gold-threaded draperies and gold-painted backgrounds where figures in the foreground appear to be floating. As a Byzantine artist, he is less concerned with realistic depictions and more with symbolism, and religious symbolism in particular. As his style matures, it begins to show the Gothic influence with more elongated figures that become more animated in pose and facial expression, appear smaller in relation to the background and are arranged more freely in the pictorial space. The style of the late Veneziano shows all the masterful blending of Byzantine and Gothic elements for which he is now renowned.

My favourite Paolo Veneziano is a rather obscure painting at the Frari, placed inside the lunette of the arch above the urn of the Doge Francesco Dandolo. The Doge’s Byzantine sarcophagus itself depicts the death of the Virgin surrounded by the disciples with Christ in the middle carrying Mary’s soul to heaven. Veneziano’s painting above the tomb portrays St Francis and St Elizabeth of Hungary who are presenting the Doge and his wife to the Virgin. Dated 1339, this is a fast maturing Paolo whose stiff and static figures hint at a fading Byzantine style and whose expressive, rose-cheeked Virgin and Child, unusually placed on her left knee, point to the new, Gothic decorative approach.

It is clear from the Dandolo Madonna with Child, Saint and Doge at the Frari that there could be no turning back to the Byzantine formalism, from which Paolo Veneziano was one of the first to break away. This painting and those that follow along Paolo’s newly discovered path are darkly mystical and infused with an ethereal emotional intensity. Stylistically, this translates into Paolo’s more rigidly geometric patterns, greater precision in capturing details and colours that become increasingly lush and vivid. With Paolo Veneziano, the Venetian school of painting effectively comes to life, with its founder exerting his influence throughout the rest of the 14th century, on Lorenzo Veneziano and beyond.