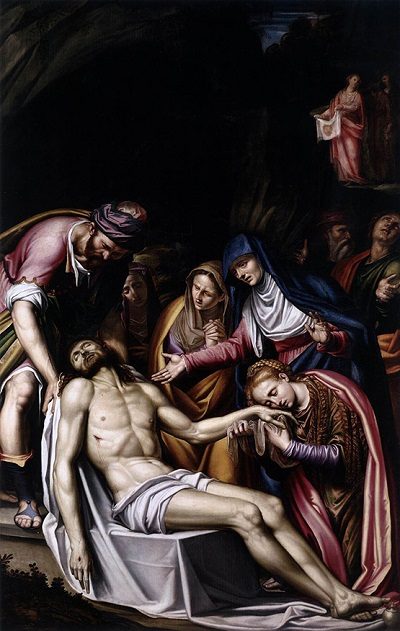 Caravaggio, who in our modern estimation revolutionised art, according to his early critics positively destroyed it. In their view, Caravaggio’s art was an insolent rejection of Renaissance ideals and painting techniques that had developed painstakingly over the preceding three centuries and could only lead back towards the crude medieval aesthetics. For John Ruskin, no less, Caravaggio was “distinguished only by his preference for candlelight and reinforcement of villainy”. The painter apparently demonstrated no capability for finding the beauty in nature but instead sought “the horror and ugliness of sin”, presumably due to his attraction to gore.

Venetian-born painter Simone Peterzano who is better known today as the teacher of Caravaggio than for his own work is a good place to start to see where things went off the rails for Caravaggio. He frequented Peterzano’s workshop in Milan between 1584 and 1589, when Peterzano left for Rome, perhaps accompanied by his apprentice. Peterzano proclaimed himself the “pupil of Titian”, which cannot be documented, but the connection seems plausible since the painter came from Venice and there is a strong Venetian element in his early works, not only reflecting Titian but also Veronese and other great Venetian painters of the Cinquecento.

Peterzano is now viewed as a late Mannerist devoted to early Mannerism. Such a penchant for anachronisms is perhaps responsible for the assessment of Peterzano as a lesser follower of Titian than an artist in his own right. Peterzano’s admiration for Titian is acknowledged as is his knowledge of other works in Venice, particularly by Tintoretto and Lotto. Artistically, he combines an interest in Venetian light and colour, inspired by Titian, with characteristic Lombard qualities acquired in Milan, such as his precise handling of paint, which is more “finished” than that of Venetians who preferred to retain traces of textured brushwork.

Not uncommonly for a painter born in Venice, the city has no known works by Peterzano but the Venetian influence persists in Peterzano’s paintings and frescoes, mostly found in and around Milan. His enigmatic altarpiece of the Deposition, now in the chapel of Milan’s Museo San Fedele, is a reference to early mannerism with the ensemble’s dramatic but controlled stances. There is an obvious Venetian connection with the composition techniques of Francesco Salviati’s Deposition painted for the now lost church of Corpus Domini in Venice. The stark, almost brutal, light makes each figure stand out and highlights the whiteness of the shroud.

Peterzano’s naturalistic backgrounds and use of colour do not particularly filter down to Caravaggio but his tutor’s use of light clearly does inspire his pupil’s iconic tenebrismo. Caravaggio could have even visited Venice with Peterzano, as has been suggested by Bernard Berenson, because Venetian mannerism and chiaroscuro seem to have made a stronger impression than Peterzano’s appropriation of Milan’s Counter-Reformation artistic trends, with their novel composition also seen in the San Fedele Deposition. At least some of Caravaggio’s style that so irked his contemporaries and so awed his modern critics is thus traceable to Venetian painting.