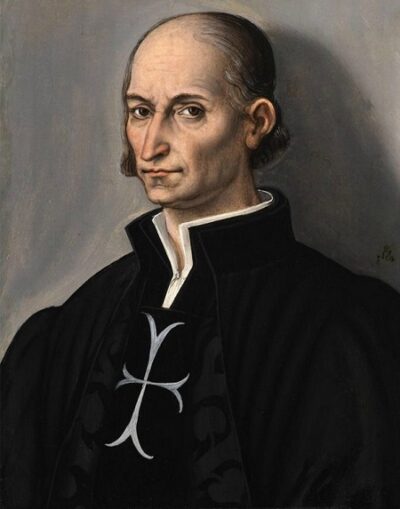 The legacy of Pietro Bembo, Venetian writer and art connoisseur, has lived on the lips of every Italian speaker to this day. As a scholar, Bembo codified Italian spelling and grammar and, unusually for a Venetian, argued for 14th-century Tuscan dialect to be the model for standard Italian. As a Renaissance courtier, Bembo also wrote poetry dedicated to his lover Lucrezia Borgia, daughter of much-maligned Pope Alexander VI, before becoming a cardinal himself despite not even being a priest.

Born into the old Venetian nobility, Bembo lived in Florence as a boy with his father, the Venetian ambassador. That’s where he learnt Tuscan and began his life-long love affair with it. Later in Ferrara he had an affair with the married Lucrezia to whom he prefaced a collection of poems written in Tuscan and modelled on Petrarch. Back in Venice, he was asked to document the city’s official history before moving to Rome where he was named a cardinal after a rapid ordination as a priest.

It was in his Writings in the Vernacular Language that he argued for the adoption of the Tuscan dialect, codified by himself, as the basis for standardised Italian. When the Italians were to pick one of the many dialects as the literary language, it came down to two choices: Tuscan – the language of Petrarch and Venetian because Venice was the centre of European printing. They chose Tuscan, mostly based on the arguments put forward by Bembo who argued against his mother tongue.

At home in Venice, Bembo re-established himself in the family palazzo on the Grand Canal. As a descendant of one of Venice’s founding families, he was appointed to the office of official historian of the city and also served as librarian of the Biblioteca Marciana. He was an avid art collector and having also inherited the large family collection, his home was like an art museum, attracting scholars from all over Europe. He became friends with Titian who painted several portraits of him.

At the age of 69, Bembo was elevated to the rank of cardinal by Pope Paul III. This was in recognition of his scholarly career, although his literary output was almost entirely secular. He spent time as a papal administrator in various Italian cities. He died in Rome where he is buried in the church of Santa Maria sopra Minerva, next to the Pantheon. Pietro Bembo’s was a life of the consummate Renaissance man: writer, poet, scholar, courtier, clergyman and, above all, Venice’s first Italian.