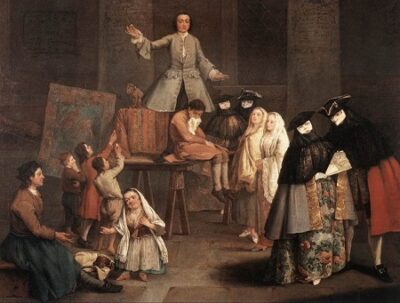 No other artist captures Venice’s masked revellers with more casual fidelity than Pietro Longhi. A contemporary of Francesco Guardi, he takes good care to catch – with vivacity and sometimes with pungent irony – passages of real Venetian life. Not that it’s ever carnival time in his paintings set in the patrician or bourgeois homes of 18th-century Venice; his characters nevertheless parade as on a stage. The atmosphere of his genre scenes is of Carlo Goldoni’s plays, of whom Longhi was a friend.

Born in Venice as Pietro Falca, Longhi was a pupil of Bolognese painter Guiseppe Maria Crespi who was well known for his studies of contemporary life, influenced by the work of Dutch painters. Longhi perfected the genre on his return to his native city where he was soon sought after by the local aristocracy for his lucid scenes of everyday life in 18th-century Venice. He continued to derive his inspiration from the Bolognese school, through Crespi, and English art, through William Hogarth.

In his typical small scenes, Longhi illustrates daily life in the Venice of his day, adopting a form of genre painting that reveals his acute observation of contemporary society, its habits and its surroundings. His art focuses on all classes of society where aristocrats and ordinary folks alike grapple with the big and small chores of life while showing an interest in the lives of others. Longhi’s brush is light as he paints his subjects without pretentiousness, though perhaps with a hint of gentle irony.

A recurring theme in Longhi’s works are his depictions of the upper classes as masked figures as a commentary on Venetian society in the 18th century. With Venice as a global power in decline, his masks add anonymity and uniformity to its noble classes. His is a portrayal of Venetian aristocracy as they really were – masked in their denial of a decaying Venice. At the same time, Longhi’s masks also represent what the 18th-century city itself exuded: an individuality and independence.

All of these attributes shine though in Longhi’s The Tooth Puller, my favourite, which now hangs at the Pinacoteca di Brera in Milan. In it, the tooth puller is showing off the tooth he has just pulled for the boy holding a handkerchief to his mouth. The upper class people passing by are wearing the Venetian domino: hooded cloak and mask. The children are feeding bread to a monkey. Everyone is minding their own business but also plays their part: the spirit of 18th-century Venice is unmistakable.