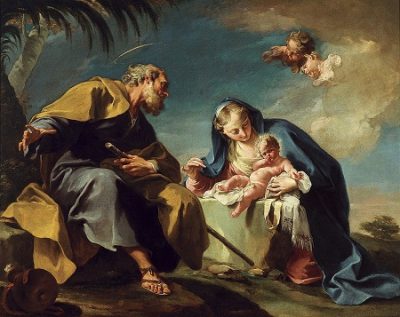 Much like El Greco, Giambattista Pittoni, the leading Venetian painter of the early 18th century, was successful during his lifetime but his reputation faded after his death and he was forgotten until the 20th century. Like his younger contemporary Giambattista Tiepolo, Pittoni spread the international success of the Venetian Rococo style. But unlike Tiepolo, he was one of the least travelled Venetian painters. Despite his many foreign commissions, no journey in connection with any of them is documented.

Pittoni, who came from a family of artists, trained with his uncle Francesco Pittoni. In addition to his skills as a painter, he was also an exceptional draughtsman known for his lively preparatory studies. The Accademia has a large collection of drawings of heads, animals and other figures by Pittoni. He was an establishment figure in 18th-century Venice where in 1750 he became one of the founding members of the city’s art academy. There he also succeeded Tiepolo as the institution’s second president.

Pittoni’s gradual change of style – from a heavy Baroque to a lighter and more delicate manner – resulted in his now famous nervous brushwork that produced his vibrant Rococo paintings. A sophisticated colourist like Tiepolo or Sebastiano Ricci, he imbued his elegant pictures with an Arcadian mood close in feeling to the French Rococo. Towards the end of his career, however, Pittoni’s palette lightened and his compositions became more sedate, probably due to the prevailing trend towards Neoclassicism.

Pittoni was famously unwilling to leave Venice and he executed his numerous public and private commissions for churches and foreign courts in his own studio. Through word of mouth, his work became widely known throughout Italy and beyond, including Bohemia, Germany, Spain and Poland. He undertook work for the Schönbrunn Palace in Vienna or for the Mariacki church in Cracow. Pittoni’s style became very influential in Bohemia where in the 18th century his name was synonymous with Venetian painting.

My favourite Pittoni, Rest on the Flight into Egypt, now in the Thyssen-Bornemisza Collection in Barcelona, contains all the elements that made the artist popular with foreign clients: the brilliant lighting, the luminous colours, the modelling of the faces and the elegant gestures and movements of the hands and bodies. Pittoni often repeated this composition and reused the models in his many religious works. In this version, the low viewpoint suggests that the canvas was to be hung in an elevated position.