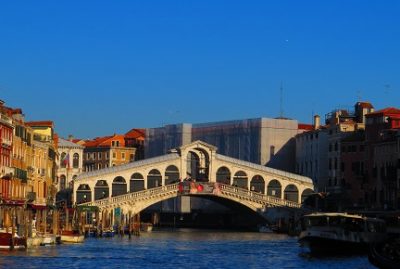 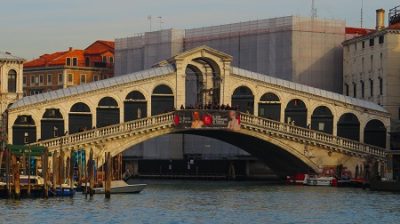 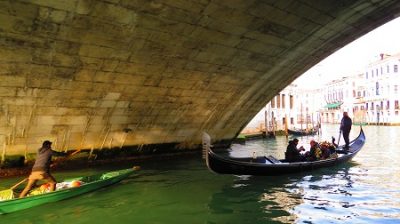 From the engineering point of view, the single-span Rialto Bridge, laden with two rows of shops and three walkways in between and around them, would have been a tough sell on solid ground. On Venice’s shifting soil it defies gravity. It has also defied sceptics for more than four centuries since its completion in 1591 when it was considered too audacious a design to last very long. Since then, it has held together with only minor repairs and grown into one of the city’s most iconic sights.

There had always been bridges at the Rialto, the narrowest point of the Grand Canal. They were wooden structures as shown in Carpaccio’s The Miracle of the Cross at the Ponte di Rialto or De’ Barbari’s woodcut View of Venice. Over time, they all collapsed which led to a design competition for a stone bridge in the 16th century. Many star architects participated, including Sansovino, Palladio and even Michelangelo. The winner, however, was Venice’s municipal architect Antonio da Ponte.

The winning design, in Venetian tradition, was similar to what had been there previously: a single-span bridge that allows for easy passing of ships underneath its stone arch. To stabilise the foundations, Da Ponte, who was also an engineer, drove as many as 6000 timber piles on either side into the marshy floor of the lagoon. Despite these efforts, many, including architect Scamozzi, doubted that the heavy Istrian-stone structure could support its weight across a span of almost 50 metres.

But Da Ponte’s design did prove resilient – so much so that it’s still standing today. To his credit, the 16th-century Venice was well into the Renaissance when engineering challenges of this kind were more likely than not to be met with enthusiasm. This particular achievement of the Renaissance was such that the Rialto Bridge served as the only fixed structure crossing the Grand Canal until 1854 when Alfred Neville unveiled the original steel version of the now wooden Accademia Bridge.

Given Venice’s topography, many of its sights appear and reappear in paintings, woodcuts and photographs taken from the same angles. This has made the city look static. The Rialto Bridge, captured either from the Rialto Market in San Polo or the Riva del Ferro in San Marco, is part of this pictorial folklore. Unlike other iconic images of Venice, like the Salute seen from the Accademia Bridge, the Rialto Bridge lacks an ideal focal point and is surprisingly difficult to reproduce in all its splendour.