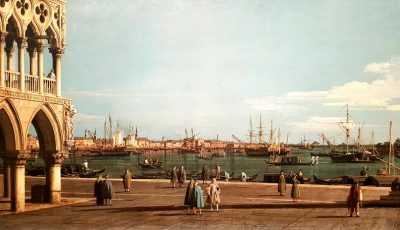 Canaletto is often seen as a creator of urban myths rather than a chronicler of realistic cityscapes. But it is his ultimate mastery of the craft of urban vedute that sets him apart from his many contemporaries as a virtuoso, improvising with the freedom of a baroque violinist. It is also true that this glowing description of the painter’s skill is mostly true of his early works which among collectors and art lovers remain his most coveted. Canaletto’s output after 1740 is now largely known for its declining quality due to repetitiveness, loss of fluidity and mechanical execution.

One of the finest examples of early Canaletto is on display at the Art Gallery of Ontario (AGO) in Toronto. The Bacino di San Marco, from the Piazzetta, around 1736, as it is labelled, is a largely descriptive title given to the work by a museum curator rather than the artist himself. The important bit of information is the year of creation and this early Canaletto has it all: compositional harmony, geometric precision, and smooth and detailed brushwork, best seen in the subtle play of light and shadow on Venice’s radiant architecture.

The AGO’s sole Canaletto has a unique quality which can be attributed to the fact that in this picture the artist was able to seamlessly blend real and imagined worlds to beguiling effect. My earlier description of Canaletto as a virtuoso is illustrated here by the artist’s oblique perspective: his view of the Bacino di San Marco from the Piazzetta shows that by taking obvious liberties with the topography the early Canaletto, who was at this point no formulaic guildsman of his later years, was never above embellishing his work through subtle geographic modifications.

Whereas Canaletto’s later ‘tourist’ paintings of Venice, which were much sought after by the travelling upper-classes, strove mostly for compositional balance, this early veduta reveals a genuine feel for dramatic effect. Here the images of recognisable landmarks – the Doge’s Palace, the Piazzetta and the Giudecca Canal – are rearranged in subtle new relationships. But the imaginary architectural details of (mostly a much denser-looking Giudecca waterfront in the background) are blended with the scenic elements of what appear to be real people in a genre that is best described as veduta ideata.

The gentle realism of this particular scene at the Bacino di San Marco as seen from the Piazzetta also defines Canaletto as an heir to the legacy of the great Renaissance masters of atmospheric depiction. In this picture, one gets a clear sense of real persons engaging in real-time activities and conversations. After all, much of the artist’s preparation work in the early years was said to be carried out ‘on location’ rather than in the studio. This is an artistic predilection that was considered highly unusual for Canaletto’s time and it is also rarely seen in the artist’s enormous oeuvre.