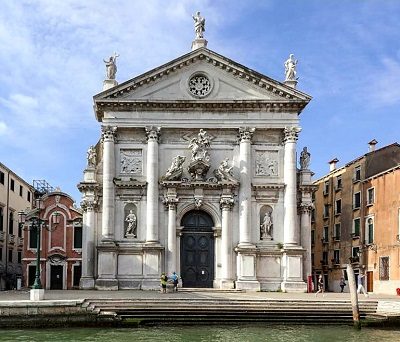 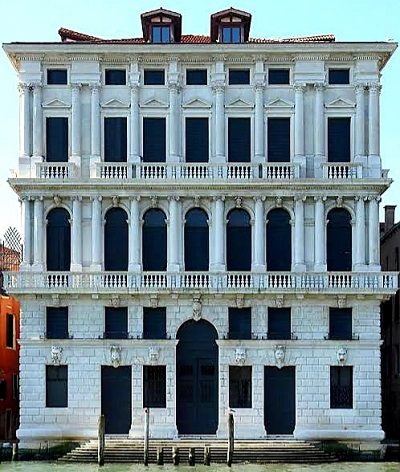 If there was a proverbial enfant terrible among the Venetian architects, it would be Domenico Rossi. With the reputation of a rascal who would throw himself into Carnival with abandon, he first made his name as a designer of firework displays. As an apprenticed stonemason, he dealt in Carrara marble and made a lot of money out of it. And as a social animal and friend of the Venetian nobility, he gained much patronage when he turned to the pursuit of architecture. He also attracted lots of jealousy and was often dismissed as lacking in taste. His legacy continued to suffer from criticism into the 19th century, most notably at the hands of John Ruskin who detested Baroque architecture.

Thankfully, the present-day appraisal of Rossi is much more appreciative, chiefly of the elegance and inventiveness with which he, like Giorgio Massari, blended Palladian architecture with the Baroque achievements of Longhena. Today Rossi, together with his contemporaries, is credited with bringing stylistic consistency to 18th-century Venetian architecture. Rossi’s careful attention to architectural detail, apparent in his church façades of San Stae and I Gesuiti, is now attributed to his early training as a stonemason which is a background he shared with Palladio, except that in Rossi’s case this came about as a result of his initial unwillingness to study architecture.

Rossi made his architectural breakthrough when he won the competition to design the façade of the Church of San Stae. This is a heavy Baroque edifice with the lightness of Palladian architecture. The white statue-laden façade facing the Grand Canal somehow never obscures the church’s neo-classical frame. This feeling spills into the interior, which is as light-drenched as any one of Palladio’s churches. The statues that animate Rossi’s façade have been branded by some critics as an attempt to emulate Bernini without the breathing space Bernini’s statues are given in Rome. A breathing space of sorts is provided by the fact that San Stae is set back from the Grand Canal by a small square.

Based on the success of San Stae, the Jesuits in Venice determined that Rossi was the ideal architect for their own church – I Gesuiti. This was not an easy task for someone like him because he had to follow strict plans laid down by the Council of Trent. His complex façade is in two tiers, with eight columns supporting eight statues which, together with four others in various niches, represent the twelve apostles. Rossi was also constrained by the Jesuits’ requirement that he pattern the floor plan on their church in Rome. His floor is paved with black and white marble which is as dazzling as the inlaid green and white marble, draped around the church’s interior columns to look like fabric.

Rossi’s best residential building in Venice is the imposing Ca’ Cornaro della Regina on the Grand Canal. Built on the site where Caterina Cornaro, the future queen of Cyprus, was born, Rossi’s palazzo intertwines Palladian, Baroque and neo-classical designs. The Palladian legacy is in its square structure and the symmetrical windows along the façade. The Baroque heritage is in its high ceilings, decorated with frescoes, and the use of convex and concave curves to create the illusion of depth. The neo-classical influence comes with the clean lines and the flat roof. The happy intermarriage of these elements creates a masterpiece – and a tribute to Rossi’s ingenuity as an architect.