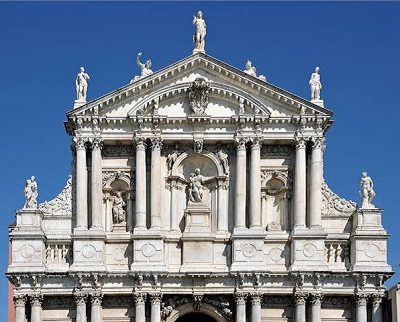 Not to be confused with a better known Baroque architect of the same name, mostly active in Rome also during the 17th century, the Venetian-born Giuseppe Sardi is responsible for several High Baroque church façades in Venice. Son of the Swiss Italian architect Antonio Sardi and uncle to Venetian architect Domenico Rossi, Sardi has created façades that are flamboyant and lavish in decoration, yet evidence of classical and Renaissance influence is visible in their Palladian frame and the use of columns and side lobes. Sardi made enough of a name for himself to be appointed as proto to the Procuratia de Supra. In this capacity, he is often described as the ‘principal architect of Venice’.

Sardi’s principal achievement in Venice is the riotous façade of the Church of Santa Maria del Giglio. This church, known for the only painting by Rubens in Venice, Madonna and Child with Young St John, has one of the most original and evocative expressions of the Venetian Baroque. Curiously, it also lacks any Christian iconography and is more of a monument to the Barbaro family who financed it. The façade features portrait statues of the five Barbaro brothers and marble relief maps of the various places in which Antonio Barbaro served the Venetian Republic, including Candia, Zadar, Padua, Rome, Corfu and Split. At the top of Sardi’s façade is the Barbaro family arms carved in relief.

Sardi’s other Venetian masterpiece is the extravagant High Baroque façade of the Church of the Scalzi which similarly ripples with columns and statues in niches. This lavish, Longhena-designed church may appear inappropriate for the presumably poor (“barefoot”) religious order, a point further underscored by Sardi’s ebullient façade. The nave ceiling with frescoes by Tiepolo was tragically destroyed by an Austrian bomb in 1915 which also damaged Tiepolo’s vault frescoes in two of the side chapels. The church also houses the tomb of Venice’s last doge, Ludovico Manin, who presided over the dissolution of the Republic in 1797 under the threat from Napoleon and died in ignominy five years later.

Sardi’s much less extravagant façade of the Church of San Lazzaro dei Mendicanti was originally designed by his father Antonio and only completed by him after the father’s death. The church itself was commissioned from architect Vincenzo Scamozzi. The classical and rather subdued façade is easy to miss because it forms part of the outer wall of a large hospital but, for this reason, it is also fit for purpose. The adjacent hospital is San Lazzaro, one of the four main hospitals in Venice, built by the Mendicant Friars from funds left over after the construction of the nearby Basilica of Santi Giovanni e Paolo. The size of the facade and Sardi’s design, make it one of the masterpieces of Venetian Baroque.

Sardi’s restoration work on the 66-metre Gothic campanile of the Carmini Church is testimony to his skills as a construction engineer. The 1290 original of the bell tower is visible on the Barbari Map. It has a long history of damage by earthquakes. It was even demolished and rebuilt taller in 1520. This tower began to lean as the foundations subsided and it was the one Sardi worked on in 1688. He straightened it by digging away at the brickwork on the three sides away from the tilt and wedging wood into the holes. He then dissolved the wood away with strong acid and the tower tilted back. The campanile remains a monument to Sardi’s ingenuity as an architect alongside his exuberant church façades.