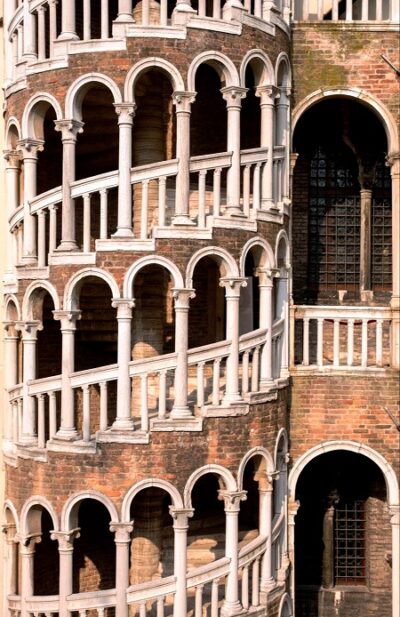 Hidden in a secluded calle is a tower-like staircase that spirals up the façade of an otherwise ordinary palazzo. In Venice where only the church and state could erect towers, this private non-tower is so dominant that it’s responsible for naming both the palace and the entire branch of the Contarini family that built it: Scala Contarini del Bovolo. The winding external staircase is also an optical illusion: it looks higher than its 26 metres due to the shrinking height of the arches as it rises.

Built at the end of the 15th century, the staircase is attributed to Giorgio Spavento whose technical skills as an architect and engineer were widely sought after in Venice at the time. Born in Lombardy, Spavento was appointed architect to the Procurators of San Marco – the prestigious post later held by the likes of Jacopo Sansovino. He built the sacristy of St Mark’s Basilica and was also involved in the repairs to St Mark’s Campanile, a perennial headache for the Venetian authorities.

Combining Byzantine, Gothic and Renaissance elements, the staircase takes the shape of a snail’s shell which bovolo is in the Venetian dialect. The palace may be located on a small backstreet in a densely populated urban landscape but the eclectic design which neatly integrates the spiral staircase into its front façade was clearly intended to showcase the Contarini wealth and power. The rising staircase leads to a circular arcade which provides stunning views of Venice’s rooftops.

The unique spiral staircase is visible in Jacopo de’ Barbari’s monumental woodcut print of a bird’s-eye view of Renaissance Venice, now displayed at the Museo Correr. The map was created in 1500, around the time Spavento’s staircase was completed. The iconic staircase also made a prominent appearance in Orson Welles’ 1952 adaptation of Shakespeare’s Othello. Although not far from the Campo Manin, the staircase can be quite difficult to find in the maze of surrounding alleys.