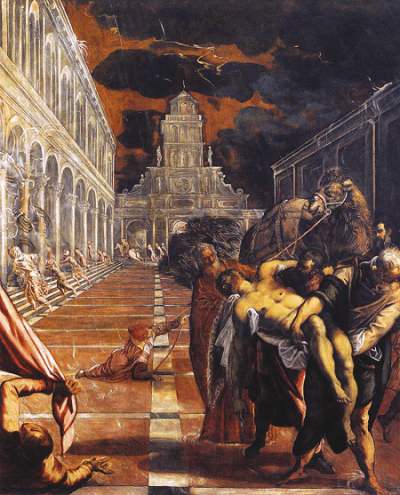 Tintoretto’s art can best be described as a caricature of himself. Painter of dominant muscular figures, he was known to compete aggressively for commissions with rivals, such as Veronese and Titian. Master of dramatic gestures, he would often shock Venetians by placing lowly characters at the centre of his compositions which also, sometimes as an afterthought, also featured Christ, the saints and angels. With these attributes alongside his bold use of perspective, Tintoretto is the ultimate Mannerist.

Born Jacopo Robusti, Tintoretto took his name from his father’s trade as a fabric dyer – tintore in Italian. Meaning “little dyer” or “dyer’s boy”, Tintoretto is a fitting sobriquet given his poetic use of colour which makes him one of the most moving painters of Venetian Renaissance. Titian reportedly threw him out of his studio after just ten days as an apprentice because Tintoretto was too good. His story is one of raw talent and ambition that trumped his humble origins and the world of Venetian intrigue.

In Venice, it’s become customary to follow the Tintoretto trail from the Scuola Grande di San Rocco, a lay confraternity, to the Doge’s Palace. His ceiling decorations of the Scuola’s main hall is now hailed as Venice’s answer to the Vatican’s Sistine Chapel where biblical depictions, monumental and daring, blaze all around you. Similarly, his Paradise in the Great Council Chamber of the Doge’s Palace, like Michelangelo’s The Last Judgement, melts the wall on which it hangs into a mass of searing light.

My go-to Tintoretto is The Stealing of the Dead Body of St Mark which now hangs in the Accademia. It depicts the legend of the two Venetian merchants who stole the Evangelist’s body from Alexandria where he was martyred and transported it to Venice which was in the market for a new patron saint. Although St Mark apparently died in 68 AD, the theft of what looks like a fresh corpse occurred only in 828 AD. The setting should be Alexandria but the painting’s architecture is similar to the Piazza San Marco in Venice.

For me, the picture’s appeal rests primarily on Tintoretto’s dramatic spatial effects. Linear perspective was a Renaissance tool for creating illusions of three-dimensional space but Tintoretto takes this idea beyond the bursting point. His colours in the foreground – of people, animals and objects – are much darker than those in the background. Tintoretto’s absurdly long and vast perspective in this painting becomes a dramatic gesture in its own right as the receding palatial vista collides with a fiery sky.