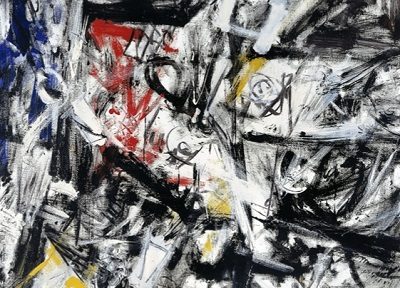 Emilio Vedova, a native of Venice and a postwar abstract expressionist, would be far better known today had he been American rather the leftwing, cranky, bearded and bespectacled hero of the radical Italian art he is remembered to be. After WW2, the momentum in the art world had irretrievably shifted to America. Abstract Expressionism was the first authentically American avant-garde: it was emphatically American, not European, in spirit, monumental in scale, romantic in mood and expressive of a rugged individual freedom.

It’s not that Vedova lacked the street cred to match this profile. His background is almost cliched: he was the third of seven children, born into a Venetian artisan family, his father was a house painter and decorator. By the age of 11, Vedova was forced to earn his living, initially in a factory and then in the studios of a photographer and restorer. As an artist, he was mainly self-taught, attending only the odd evening art class. And, of course, he was an anti-fascist, championing every possible leftwing cause he could lay his hands on.

Vedova’s trademark is a highly energetic, expressive and large-scale painting style that bridges the divide between painting, sculpture, performance and architecture. His works not only fill physical spaces but essentially redefine them. His work became progressively more abstract with time, with surfaces filled with increasingly wilder patterns of smeared, poured and dripped paint. This style is almost identical with the free abstraction of French art informel and American action painting.

In some ways, Vedova was Italy’s answer to Jackson Pollock, not least because of his association with Peggy Guggenheim. This American art collector defied history by moving to Europe just as the dominant art trends were going in the opposite direction. An early champion of Pollock in New York, in Venice she also became an early supporter of Vedova. The legend goes that the young Vedova was in fact the first artist to meet Guggenheim upon her arrival in Venice in 1946 and that she recognised in him a rising star of the European avant-garde.

In addition to the Peggy Guggenheim Collection on the Grand Canal, Vedova’s works can in Venice be viewed primarily at the Fondazione Emilio e Annabianca Vedova which now honours the city’s famous abstract artist. Near the Foundation’s headquarters at the Zattere are its two exhibition spaces: the Magazzino del Sale – designed by Renzo Piano – and the Spazio Vedova. Outside of Venice, Vedova is a standard addition to any collection that provides an overview of postwar European abstraction.

Vedova’s life and art have made him into something of a caricature. He was a true radical in both politics and art technique – a European Jackson Pollock who lived up to the mainstream depiction of art expressionism as a movement populated by paint-splattered, heroic male artists. But apart from being Italian, Vedova was also a Venetian. His Venetian connection also shows that this ultimate historic city is not frozen in time as a repository of old masters paintings and nothing more besides them.