Venetian beauties of Palma the Elder 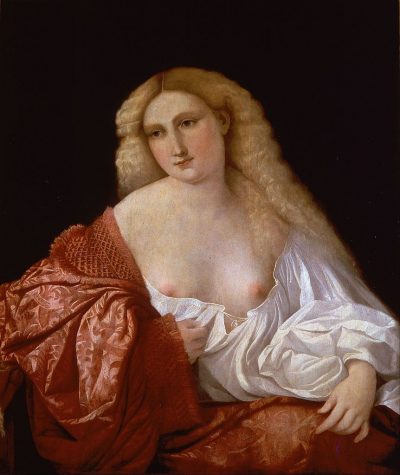 Venetian beauties of Palma the Elder

Venetian art, much like Venice itself, is split between the portrayal of religious zeal and secular pleasure, the sacred and the profane. Few artists capture both ends of the spectrum better than Palma the Elder. His highly individualistic style may owe a debt to Titian and Giorgione but Palma’s work is instantly recognisable on its own. With few public commissions in Venice, he mostly catered to private patrons and for this reason he may be best known for his half-length pseudo-portraits of beautiful Venetian courtesans.

Born Jacopo Palma or, alternatively, Jacopo Negreti, he became known as Palma the Elder only after his death to distinguish him from his great-nephew Palma the Younger. Palma the Elder came from Bergamo but he spent his creative years in Venice. With a respectable number of altarpieces to his name, he found himself, alongside Titian, to be the leading figure in Venetian portraiture of the early 16th century, much in demand for his paintings of women whose appearance may have been inspired by the look of local courtesans.

My favourite among these Venetian portraits is Palma the Elder’s Portrait of a Woman known as the Courtesan which now hangs at the Museo Poldi Pezzoli in Milan. It reveals the artist’s breathtaking command of colour and the sculptural molding of figures through light and shade. It also draws a contrast between the elaborate drapery of the young woman’s chemise and dress and the relative simplicity of her flesh. The latter comes close to the Art Deco style of Tamara Lempicka with its geometric but sensuous forms.

Palma’s female model has dyed blonde hair with darker roots showing – the common practice at the time for Venetian courtesans who bleached their hair in the sunlight. Like his other models, she has a fresh face with flushed cheeks and nipples that are noticeably more pronounced than the rest of her naked flesh. The gatherings of her garment only serve to emphasise the artist’s summary execution of her body and face. This is a sensuous portrait of feminine mystique that belongs as much in the 16th as in the 21st century.