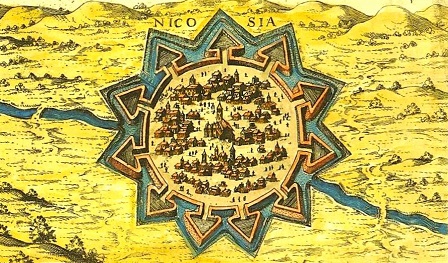 Before Cyprus was part-Greek and part-Turkish, it was all Venetian. Already trading on the island for centuries, Venice gained a foothold in Cyprus when its king married a Venetian-born bride. Venetian merchants then elbowed their way into government past the Venetian queen whom they promptly exiled from her new home. The colony lasted a century until the Ottomans took Cyprus despite some of the best fortifications Venice had ever built and Europe had known.

Venetian merchants had a presence in Cyprus from about 1000 AD when Venice’s commercial and military expansion in the eastern Mediterranean began. Its strategic position in the region made the island desirable both as a trading post and a military base. In 1468, already well established in Cyprus, Venice was more than pleased when James II of the House of Lusignan, who just became King of Cyprus, chose to marry a teenage Caterina Cornaro from a noble Venetian family.

Conveniently, James died soon after the wedding and Caterina, who was then regent, became queen when their infant son also died in 1474. The Kingdom of Cyprus had already been a dependency of the Mamluks since 1426 and Caterina’s rule only served to secure the commercial rights of Venice there. Bit by bit, Venetians merchants took over and in 1489 forced Caterina to abdicate, pass the government of Cyprus formally to Venice and retire to the Venetian mainland.

Seen as the last Crusader state, Cyprus was in fact populated by Orthodox Greeks. They were oppressed first by the Latins linked to the Lusignan kings and then by the Venetians who were just as Catholic. These tensions were made worse by the Ottoman Turks whose raids of the island culminated during the Venetian rule. Anticipating all-out conflict, the Venetians fortified the island. Famagusta and Nicosia, the new capital of Cyprus, were ringed with earthworks cased with stone.

That full-scale invasion came in 1570. After a siege, Nicosia fell that same year while Famagusta lasted into the next. Nicosia’s star-shaped Venetian walls couldn’t keep the Ottomans out but managed to exhaust them enough for the next round. That followed in 1571 when in the Battle of Lepanto, the largest naval battle in history, the Ottomans were defeated by the Holy League. The Venetians may have lost Cyprus but they ensured that Christian Europe would hold out.